Adult – The moth is characterized by long, narrow, usually dark forewings which are pale near the tips. There are three black dashes on each forewing. Hind wings are white with dark veins and broad, dark, indefinite margins. The wingspan varies from 38 to 51 mm.

Larva – There are six instars ranging from 4 to 46 mm in length. Above the spiracles, the larva is basically one color, varying from light gray to nearly black. The spiracles are distinctly black. When disturbed, the larva curls up.

Pupa – The brown pupa is about 17 to 22 mm long, with distinct mouthparts and antennae. 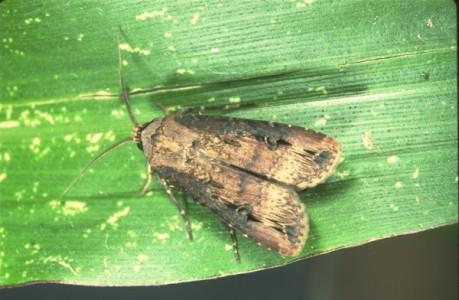 Cutworms damage seedling soybeans by cutting the stem just below the cotyledons. These light gray to almost black caterpillars (from 3⁄4 to 11⁄2 inches long) commonly occur in soybean fields, especially no-tillage fields, but rarely kill enough seedlings to affect yield. However, occasionally fields may suffer enough damage to warrant treatment, if discovered in time. If cutworms are not discovered early enough, replanting may be necessary. Before replanting, it is a good idea to examine the field for the continued presence of cutworms and, if high numbers are present, treat the affected area when the replanted seedlings emerge. During daylight hours cutworms hide within the ground or under surface trash.

The black cutworm is a widespread species which can be found from southern Canada throughout the United States, Mexico, and South America. Each year in North Carolina, infested fields occur from the coast to the Tennessee state line. The threat of an infestation appears to be greatest in no-till or weedy corn fields, especially in poorly drained areas.

Black cutworms are among the most destructive of all cutworms. The larvae sever plants from roots near the soil line; usually no other feeding damage is present. Many larvae move from plant to plant on successive nights, while some stay to feed on the roots and underground stems of cut plants.

Between 5 and 11 days after emergence, each female begins to deposit about 1,300 eggs in clusters of 1 to 30. Most eggs are laid on low, densely growing plants like chickweed, curly dock, and mustard; corn and soybeans are among the least attractive oviposition hosts. The egg stage lasts 3 to 16 days, depending upon the temperature. These cutworms prefer moist soil where they are usually found in tunnels 8 to 10 cm beneath the surface. The destructive larval stage varies in duration from 3 weeks (or slightly more) in July to over 4 weeks in September. The July-to-August pupal stage lasts about 2 weeks for early pupae; later ones require as much as 8 or 9 weeks.