Skip to Biology and Life Cycle

This insect goes by many common names – corn earworm, soybean podworm, cotton bollworm – due to the many different crops it infests. The caterpillar life stage of the corn earworm is the most serious insect pest of North Carolina soybeans. Soybean field infestation normally occurs in later July and into August, following several build-up generations in other crops. Corn earworm overwinters as a pupa in the soil. The pupa change to moths in the April / May period and fly to whorl stage corn, or wild hosts, and lay eggs for the first generation. Following several weeks of development, first generation moths emerge around the time when corn pollinates and are strongly attracted to fresh corn silks for laying the second generation eggs. Corn ears provide protection and a good food source and a large increase in population is realized during the second generation. After developing in the ears, larvae eat through the husk and drop to the ground and pupate in the soil. Moths of the second generation emerge from corn fields, from mid- July and into early/mid August, and seek soybean, cotton, peanut, sorghum, and other crop and wild host plants. This is often concurrent with the time period when soybeans are attractive to corn earworm (immediately prior to flowering until early pod-set). There is also a September moth flight and very late planted soybeans are sometimes suitable (not past blooming and early podding) for egg laying and small caterpillar survival. Yearly fluctuations in population may be great, with high populations often occurring in seasons of early warm and dry weather. In some years, a fourth generation may emerge. The July / August moth flight is monitored throughout North Carolina each year and presented in extension reports as corn earworm or bollworm moth trap catches. This information can be very helpful for determining when to scout soybeans. 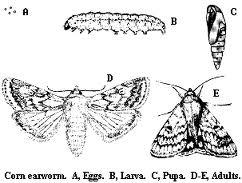 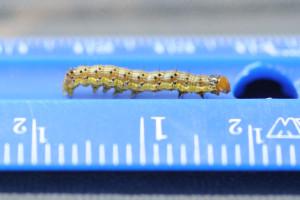 The adult corn earworm is a robust light brownish-tan, rust- tan or olive-tan to olive, fast flying moth with a 1” to 1 1⁄2” wingspan. This moth has greenish eyes when living and a prominent dark spot on each forewing. The moths are active during the evening and dark hours but can be commonly seen in fields during the day. Eggs are laid individually on soybean terminals, flowers and leaves. Eggs can be easily seen (round, white to yellowish egg of about the size of a period in this text).

Caterpillars have five pair of fleshy prolegs and range in size from 1⁄16” (newly hatched) to 13⁄4” (last stage) long. When these larvae fall from the soybean plant they usually curl into a tight circle. Color varies considerably but small larvae are usually brown with a dark head and larger larvae may range from green, yellowish, to black with distinct cream-colored bands running the length of the body; the head color on large larvae is usually orange. 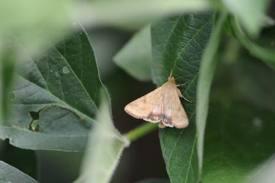 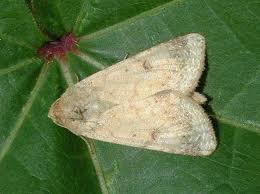 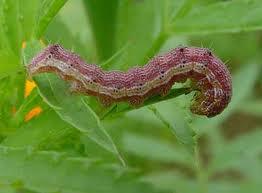 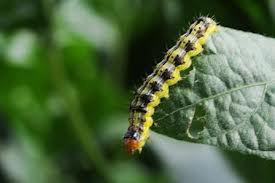 On soybeans, the corn earworm may feed on foliage, flowers, and fruit. Eggs are laid over the entire plant, but small caterpillars must have tender vegetative terminals and / or flower clusters for high survival. Soybean fields that bloom during the moth flight are most likely to be infested above the economic threshold, although pre-bloom soybeans sometimes have high caterpillar abundance. Soybeans that bloom early, before the moth flight, usually escape infestation. The most serious yield losses occur when large corn earworm larvae coincide with soybean seed that have achieved almost full size. This is when caterpillars feed exclusively on seeds and have a large appetite. Feeding by small caterpillars on terminals, flowers, and small pods does not reduce yield. However, occasionally large caterpillars will cause severe defoliation that will reduce yield. 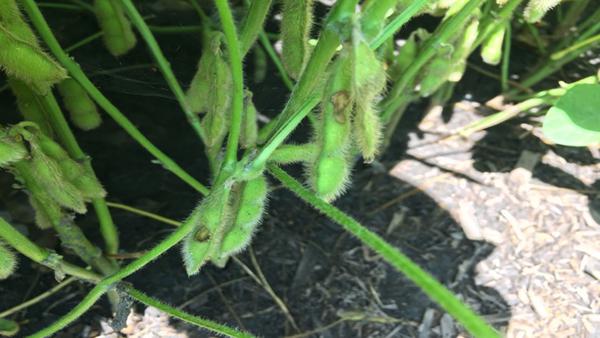 The threshold for corn earworm is dependent upon the sampling method, cost of control, row width, and soybean price. The threshold does not decline when prices are above $10/bu because soybean can compensate for low levels of pod injury. An online calculator for determining the threshold level in podding soybeans can be found by clicking the following link: Corn Earworm Threshold Calculator for Soybeans.

In flowering soybeans, remember that a soybean plant produces many more flowers than it can convert into pods and seeds. Recent studies conducted in NC have shown that corn earworm larvae can eat and injure flowers, but that the soybean plant compensates for this loss. Yield losses were not recorded even with corn earworm levels three times higher than the economic threshold for podding stage soybeans. There are very few cases when corn earworm larvae should be sprayed in flowering soybeans.

Ideally, treatment should be directed to mid-size larvae since control of small larvae is sometimes difficult (they are within flower clusters, terminals, etc) and large larvae may have already caused economic loss. Note that during 2019, NCSU entomologists began encouraging growers to restrict the use of chlorantraniliprole (Besiege and Prevathon) in soybeans to preserve its utility in cotton. Soybean growers have a number of effective insecticides for corn earworm at their disposal (e.g., indoxacarb, spinetoram, and spinosad). In the past, pyrethroid insecticides were most commonly used to reduce corn earworm numbers below the economic threshold, but this insect is now resistant to pyrethroids in the state. Furthermore, some populations of “corn earworm” in soybeans have recently been found to be composed of mixed populations of corn earworm and tobacco budworm (Heliothis virescens Fabricius). Tobacco budworm has long been resistant to pyrethroids.