Forest carbon projects are measured in metric tons of carbon-dioxide equivalent, also known as an offset, and designed to augment carbon sequestration, or the rate of carbon dioxide removal from the atmosphere. Offset projects, including forest carbon projects, must meet established standards to be registered in a public, independent registry. The projects are then monitored and verified to account for actual additional carbon, which acts as the basis for compensation to project owners. The private project developers play a vital role in connecting the buyers and sellers, as well as assisting those looking to participate in carbon offset projects. More specifically, project developers aid in performing feasibility (or validation) studies of potential carbon projects. Eligible carbon projects must include forest management activities that sequester additional, permanent GHG emissions and prevent leakage of GHG emissions to outside the project area. More details on forest carbon projects and markets are available at An Introduction to Forest Carbon Offset Markets.

The figure below outlines the common agents involved in forest carbon markets. 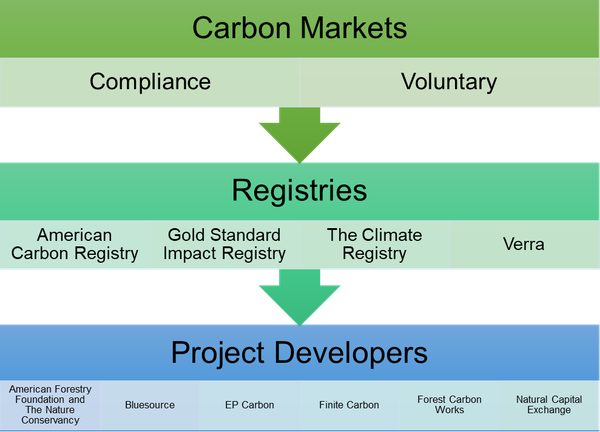 Skip to Main Features of the Forest Carbon Developers

We found six major forest carbon project developers actively working in the forest carbon space lately. We have listed their main characteristics, fees, and other requirements in the table below.