Skip to Biology and Identification

Adults are moths an inch or more long that are mottled gray and brown with a “snout” protruding beyond the head. The body is a triangle shape when the moths are at rest. Females moths lay eggs on both the top and bottom of the leaf. Larvae are light green caterpillars with a light stripe running along the side of the body. There are small, but relatively long, hairs that protrude from the body. Larvae move in a looping motion and will wriggle violently when touched. There are 6 to 7 larval instars and, while most pupate in the soil, some will pupate on the plant. 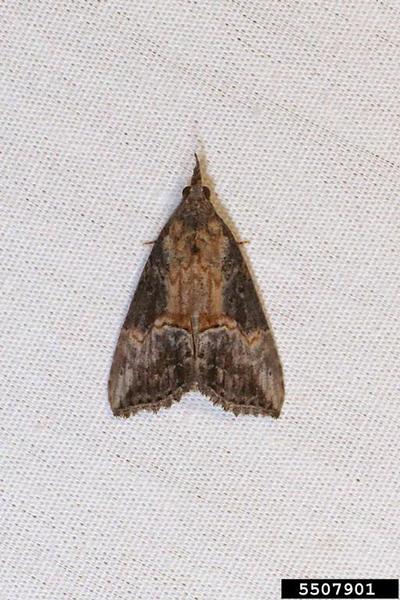 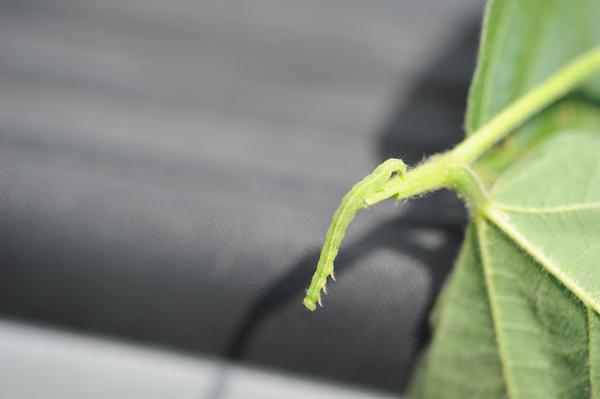 This insect overwinters in North Carolina and can be found in soybeans throughout the season. Larvae feed on the bottom of the leaf, consuming all but the veins, which results in a lacy appearance. While small larvae will feed throughout the plant canopy, larger larvae tend to feed in the top third of the canopy. Therefore, the damage from this insect tends to be more visible than other insects. Green cloverworm rarely triggers treatments solely due to their feeding. They simply don’t consume enough tissue to warrant consideration as a serious pest. However, in combination with other defoliators, they can add to problems as a complex. Many consider the presence of a few green cloverworm larvae in the field to be beneficial, since they attract predators and parasites that may also consume other more serious pests.