Management of Palmer Amaranth in Sweetpotato

Skip to Reproduction and Growth Habit of Palmer Amaranth

Palmer amaranth is an annual weed (Franssen et al. 2001) originating from northern Mexico and the southwestern United States (Ward et al. 2013). It can tolerate high temperatures better than many crops, with highest growth rates occurring between 97ºF and 115ºF (Ehleringer 1983). Palmer amaranth grows rapidly, at a rate of 2.5 inches a day (Smith 2018). Its fast growth and establishment allow it to compete with the production crop for water, nutrients, and light. Each female plant can produce between 200,000 and 600,000 seeds per plant, depending on time of emergence (Keeley et al. 1987). Palmer amaranth is highly opportunistic—with optimal temperature and moisture, 100% of viable seed will germinate on the first day of planting (Steckel et al. 2004). Palmer amaranth grows faster and accumulates more dry matter than other Amaranthus species, including redroot pigweed (Sellers et al. 2003).

Impacts of Palmer Amaranth on Sweetpotato Yield and Quality

Skip to Impacts of Palmer Amaranth on Sweetpotato Yield and Quality

Assuming a 5% acceptable marketable yield loss threshold, the critical time for Palmer amaranth removal in sweetpotato is two weeks after transplanting. Thus early-season scouting and early removal of Palmer amaranth in sweetpotato fields are critical. Any delay in removal can result in substantial yield reductions and fewer premium quality roots. 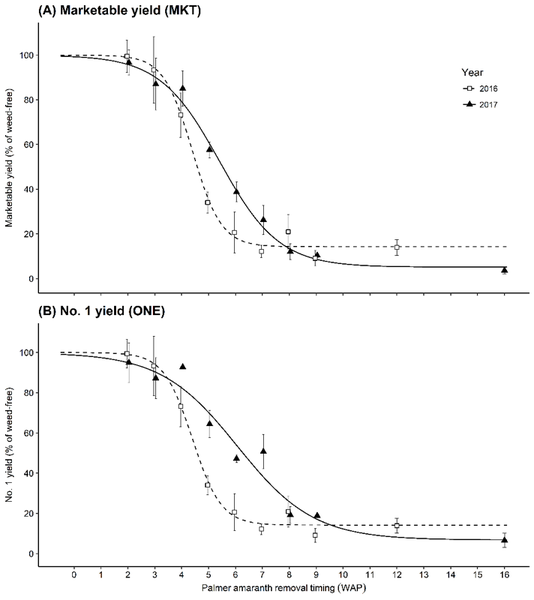 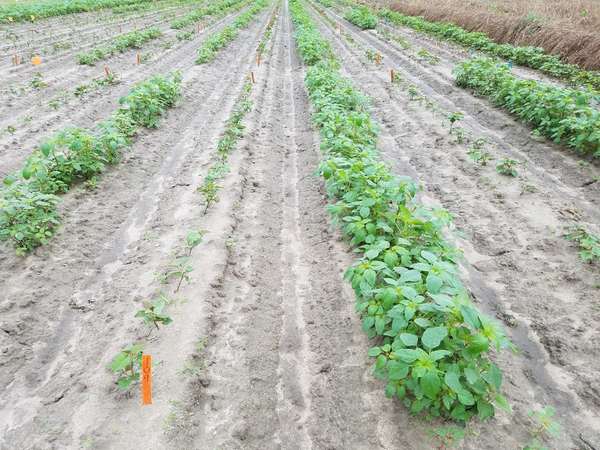 Figure 2. Palmer amaranth interfering in sweetpotato at 3 weeks after transplanting in Clinton, NC in 2017. The first row (stake row) is a weed-free border row, while the second is a treatment row with Palmer amaranth growing above the sweetpotato plants.

Figure 2. Palmer amaranth interfering in sweetpotato at 3 weeks after transplanting in Clinton, NC in 2017. The first row (stake row) is a weed-free border row, while the second is a treatment row with Palmer amaranth growing above the sweetpotato plants. 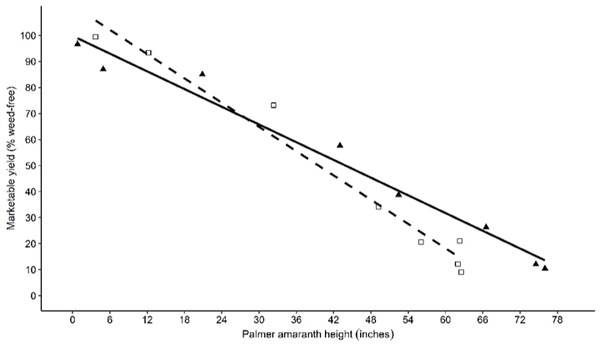 Figure 3. Marketable yield* as predicted by Palmer amaranth height in 2016 and 2017 in Clinton, NC. *Marketable yield is the addition of no. 1 and jumbo roots.

Figure 3. Marketable yield* as predicted by Palmer amaranth height in 2016 and 2017 in Clinton, NC. *Marketable yield is the addition of no. 1 and jumbo roots.

Palmer amaranth emerges from March to October in North Carolina and is able to germinate, grow, and produce seed in about 30 days. Start with a clean seedbed. All plants should be controlled prior to seed production.

Other methods to control Palmer amaranth in sweetpotato include cultivation, hand removal, and mowing. Standard cultivation equipment can be effective at removing small (< 2 inches) Palmer amaranth in and between rows if cultivation is timely (K.M. Jennings, personal communication). Hand removal of Palmer amaranth is possible but very expensive ($200 to $400 per acre) compared to other weed control methods (Ted Burch, grower, personal communication in a telephone conversation Nov. 13, 2018). It can be difficult to remove Palmer amaranth by hand once it reaches about 18 inches tall because the stem has become woody and a deep taproot and network of fibrous roots have formed. It may be necessary to use a machete to cut the stem at the soil surface if the plant cannot be pulled by hand. Any removed plants must be taken away from the field and composted or burned. Plants left on the soil surface will reroot and continue to grow and produce viable seed. Broken stems as small as 1 inch can resprout, flower, and produce seed (Sosnoskie et al. 2014).

If Palmer amaranth plants escape control and grow above the sweetpotato canopy, it can be beneficial to use a mower to control the portion of the weed that is above the crop canopy. Mow Palmer amaranth before seed maturity to avoid the seed being distributed onto the soil surface, where it may germinate the same season or in future years. After mowing, Palmer amaranth adopts a horizontal growth pattern. Though it will still compete with the crop for water and nutrients, it will no longer shade the crop and if mowed at the right time will produce fewer seeds.