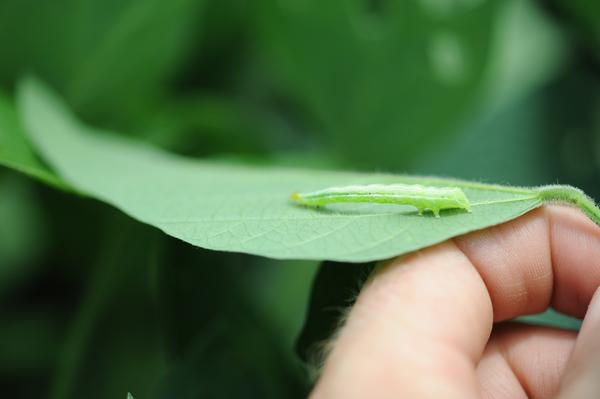 The defoliating soybean looper is a year-round resident of more southern areas, but it migrates into North Carolina each year. The immigration pattern is typically along the coast from south to north and spreading inland. Coastal counties south of Cape Lookout have the highest likelihood of economic infestation, although in some years infestations may spread above the Albemarle Sound and inland to I-95. The moth is a dark brown robust moth with a small silver-white figure eight spot on each forewing. Larvae are green with whitish lines along the length of the body and three pair of fleshy prolegs. The body of the larvae is tapered from the rear (largest) forward to the head. Often the true legs and head are black. Larvae crawl with a distinct looping motion and may rest in this pose. The caterpillar favors the lower plant canopy and leaf underside, but will feed over the entire plant as defoliation progresses.

This caterpillar is a voracious feeder and high-abundance populations can completely strip the foliage from fields; they do not feed on pods. Soybean looper moth populations peak in late August. Moths colonize soybean and cotton fields. High infestation is often associated with the removal of predators and parasites by insecticide use for corn earworm (bollworm) control. Also, research has shown that moths feeding on cotton nectaries develop and lay many more eggs, resulting in higher populations in the vicinity of cotton fields. Peak larval populations occur in September, mostly on later planted soybeans; as a result double crop soybeans are the most susceptible. 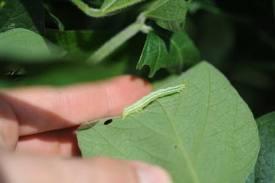