Adult – This green, wedge-shaped bug ranges from 6.0 to 6.5 mm in length. The male is slightly smaller than the female and has a red or orange stripe on its “shoulders.”

Egg – The white, oblong-oval egg is 0.9 to 1.3 mm long. It is slightly larger at one end, that end having a rough surface.

Nymph – The straw-colored, wedge-shaped, and heavily spined nymph has white legs, antennae, eyes, and abdomen. The mature nymph is active and about 4.6 mm long. 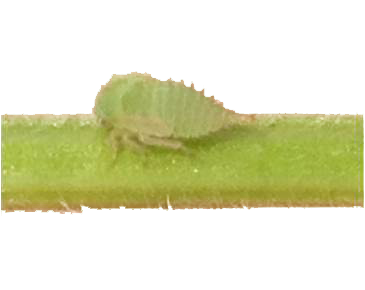 Three-cornered alfalfa hopper and damage to a stem.

Three-cornered alfalfa hopper and damage to a stem.

Three-cornered alfalfa hoppers occur as far north as Canada, but they are an occasional or potential problem only in the southern United States and in northern Mexico. They are prevalent from southern California to North Carolina, usually in early soybean plantings.

Alfalfa hopper damage may be detected from the seedling stage and into mid-season. Both the adults and nymphs feed on the soybean plant by piercing the main stem, branches, and leaf petioles and sucking sap. Typically an insect will repeatedly feed at the same location on the stem, but ring the stem or petiole. This feeding cause a swollen, callused spot which is weak and will break during windy conditions. Lodging of the mainstem or aerial stems is what causes the farmer to be concerned. However, in North Carolina this damage is not regarded as important. Nymphs and adults weaken the lower stem by piercing it with their needle-like mouthparts and extracting plant juices. As a result, lodging and breaking usually occur weeks after attack. There is some evidence that if damage is randomly scattered and occurs before bloom, in an optimum stand, reduction of at least 25 percent may be necessary to reduce yields. However, these pests rarely cause economic damage in North Carolina. 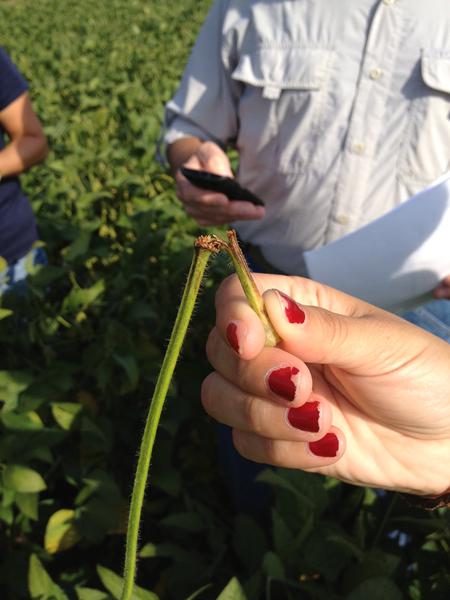 Three-cornered alfalfa girdle on a mainstem.

Three-cornered alfalfa girdle on a mainstem. 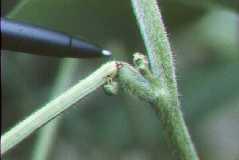 Three-cornered alfalfa hoppers overwinter as eggs in plant tissues or as adults protected by clumps of grasses. Young nymphs from overwintering eggs and overwintered adults begin feeding on weedy plants along field borders in the spring. During May or June, they migrate to soybean seedlings. Females then deposit 30 to 40 eggs, singly, in host plant stems. Nymphs hatch from the eggs 2 to 6 weeks later. They feed for 3 to 10 weeks before fifth instar nymphs molt into adults. On the average, 50 days elapse between egg deposition and adult emergence. The adults are strong flyers and readily migrate to new fields. Although the biology of this pest has not been studied in North Carolina, there are probably at least two generations each year.

Damaging infestations of the three-cornered alfalfa hopper can be avoided by destroying weedy borders around fields and by seeding a little more heavily. The first practice eliminates overwintering sites from which the bugs will migrate to soybeans. The second practice reduces the importance of the loss of a few plants.