A Close Look at the North Carolina Logging Industry: Historical Trends and Impacts of the COVID-19 Pandemic

Skip to Recent Trends in the North Carolina Logging Industry

Figure 1 depicts the historical trends in the annual size of the logging industry and the average weekly wage of loggers in North Carolina. According to the data reported by the Quarterly Census of Employment and Wages of the US Bureau of Labor Statistics, the North Carolina logging industry has shrunk about one-third over the last two decades. In 2001, there were 688 independent logging companies in North Carolina, but that number dropped to below 500 in 2009 and has stabilized in the upper 400s in the last decade (QCEW, 2020).

Figure 1 also presents the real (inflation adjusted) average weekly pay of loggers (in 2019 dollars) in North Carolina. As indicated by the yellow line, the real average weekly wage has constantly trended upward. It has increased considerably since the 2008-09 great recession. In 2019, the loggers’ weekly pay was $861 on average, which was about 22% higher than the 2009 wage level. Lower competition from the decreasing number of companies could be a reason behind the pay increment in recent years. 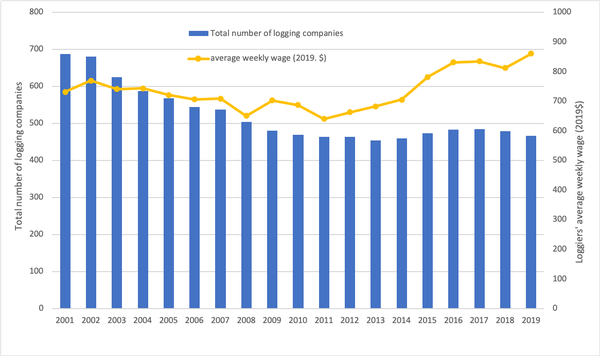 The quantity of timber harvests also highlights the prominent role of the logging industry in the forest product supply chain. The bi-annual timber products output (TPO) survey conducted by the US Forest Service revealed that the total industrial harvests of various timber products followed the logging industry trend closely (Figure 2). The total annual timber harvests in North Carolina, including both hardwood and softwood products, were around 30 million green tons in the early 2000s, which dropped to 23 million tons in 2009 and remained at around 25 million tons in the last few years. The trend also shows that hardwood harvests have been declining while the quantity harvested of pine products has remained relatively flat. The hardwood timber harvests were approximately 12 million green tons in 2001, which dropped by almost half to 6.3 million green tons in 2017.

Figure 3a and Figure 3b present the historical stumpage and delivered prices of pine sawtimber and pine pulpwood, the two most common timber products in North Carolina. For both products, the differences between the delivered and stumpage prices, often termed harvest margins, have been increasing over the years. The harvest margins should cover the cut and load costs, hauling costs, and the logger’s margins. Since 2012, the harvest margins were higher for pulpwood than for sawtimber products as indicated by the price series reported by TimberMart South. In 2019, the differences between delivered and stumpage prices for pine pulpwood and sawtimber in North Carolina averaged $20.20/ton and $18.70/ton, respectively. In 2019, the south-wide average cut and load costs were reported to be approximately $11.50/ton, and the hauling costs averaged around $7-$7.50/ton for the 50 miles of hauling distance (TMS, 2020). 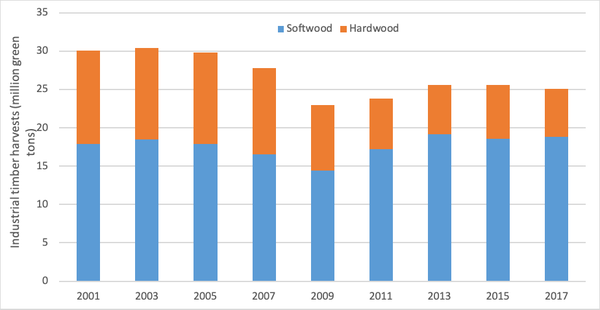 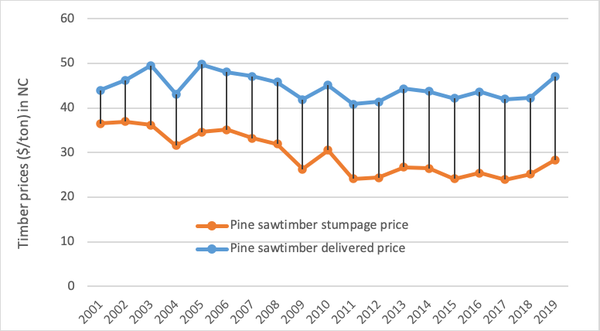 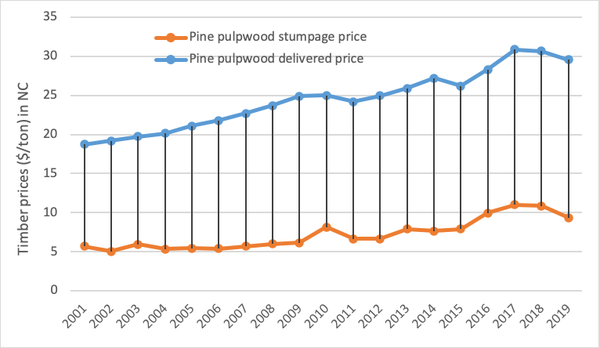 Skip to Economic Contribution of the North Carolina Logging Industry 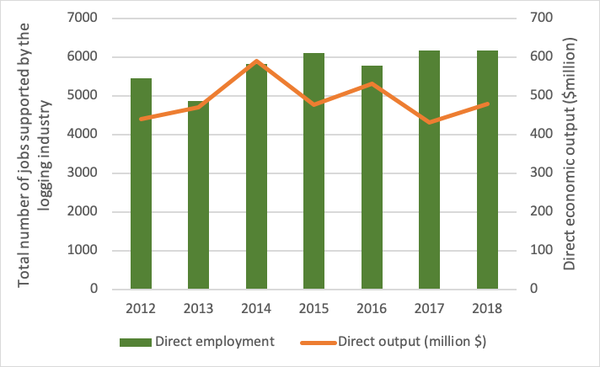 Since early March 2020, every sector of the economy throughout the world has been hammered considerably by the global pandemic COVID-19, and the logging industry is no exception. While forestry has been designated as an essential industry and demand for tissue-based products skyrocketed during this Pandemic, primary solid wood industries reportedly lost their ground in the last three months. The housing markets dropped significantly in April with less than 900,000 U.S. total housing starts. When the primary wood using mills lost their production, the logging sector obviously absorbed some of that pain.

A quick survey of loggers conducted by the Carolina Loggers Association in the third week of May suggested that loggers in North Carolina realized about a 30-35% reduction in logging activities during this unprecedented period (E. Smith, Personal Communication, May 2020). While the overall economy is projected to start recovering in the third quarter of this year, most of the survey respondents predicted that more severe impacts are yet to come.

As mentioned above, the North Carolina logging industry in 2018 contributed $798 million dollars to the state economy, which can be roughly assumed at $66.5 million a month (Parajuli and Bardon, 2020). With the survey finding of a 30-35% loss in NC logging production during the 3-month period, it is estimated that the total economic loss, including direct, indirect, and induced effects, in a quarter could sum to around $60-70 million. The total economic loss to the NC forest sector could be even larger if we account for the reduced amount of wood delivered to the primary wood processing mills. Similarly, the loss could scale up tremendously if the Pandemic effect sustains longer in the coming days. Please note that this is a rough estimate based on the evenly distributed annual effects of the North Carolina logging industry into a monthly frequency.

The long-term historical trends suggest that the North Carolina logging industry has been a crucial element of the NC forest sector over the years. While the number of logging firms has declined over time, the weekly wage of loggers has continued to move upward since the early 2000s. Similarly, primary wood processing mills received about 25 million green tons of harvested timber annually in the last few years, which was harvested and delivered by loggers in North Carolina. The timber prices portion related to logging and hauling also continued to move upward in North Carolina. However, due to the COVID-19 pandemic, the logging industry has sustained a 30-35% loss in the last three months, which translates to around a $60-70 million loss to the North Carolina economy. That loss is predicted to climb even higher amid the looming unprecedented situation.