This publication is a how-to guide for starting a garden-related vermicomposting bin in a childcare center Outdoor Learning Environment (OLE) or indoors. Included is guidance on design, construction, and management of vermicomposting bins as well as curriculum connections. This is the last of eight publications about childcare center production gardens.

Vermicompost is a mixture of castings and decomposing organic materials. Adding vermicompost to soil improves its structure, helps water to permeate and stay next to plant roots, and helps roots to spread by loosening soil particles. Vermicompost increases plant growth and vegetable plant yields and decreases attacks by insects and plant diseases. Feeding food waste to earthworms, not putting it in the trash or washing it down the sink, supports a healthy environment. 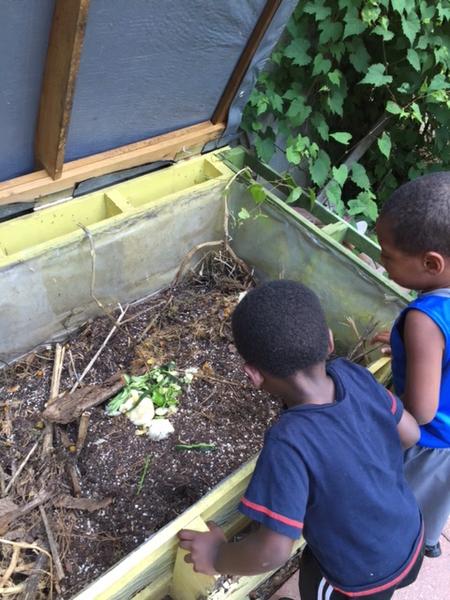 Observing worms in a vermicompost bin.

Observing worms in a vermicompost bin. 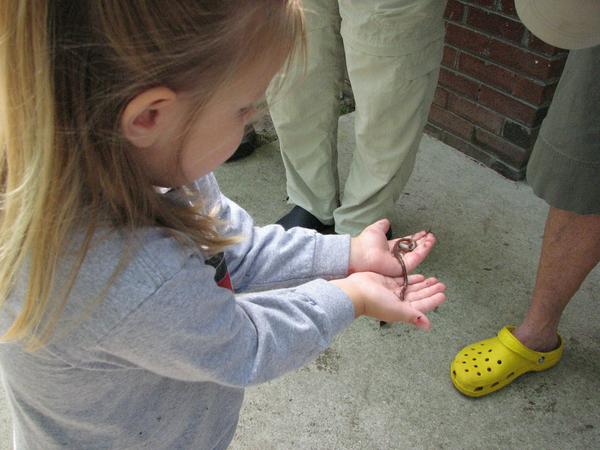 Learning about earthworms through vermicomposting provides a fascinating experience for children.

Learning about earthworms through vermicomposting provides a fascinating experience for children.

Skip to Using the Correct Earthworms

There are more than 9,000 species of earthworms worldwide, but only four species are suitable for vermicomposting in the United States. The species used by most people is Eisenia fetida (commonly called red wigglers). To start the process, one pound of worms (about 1,000) purchased from a worm grower are needed for each square foot of surface area of the bin. The worms can consume about one-quarter to one-third of their body weight daily1. Contact your local North Carolina Cooperative Extension center for a list of local worm growers. 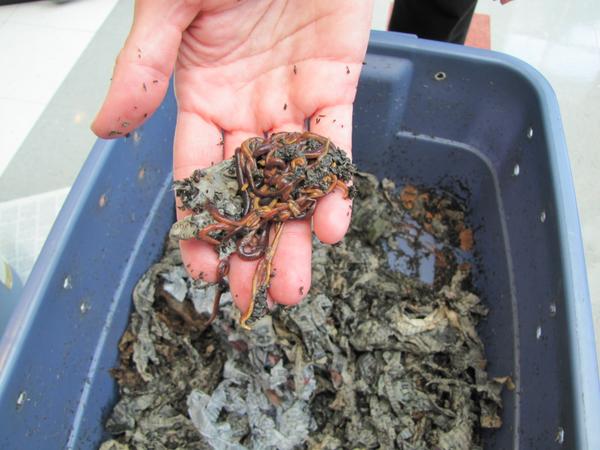 Setting Up a Worm Bin

Skip to Setting Up a Worm Bin

Worm bins can be purchased or constructed of wood, or a plastic storage bin can be installed in a classroom or outside by the Outdoor Learning Environment (OLE) garden. Consider installing both bin types to increase experiential learning. Because red wigglers like temperatures of 55 to 80°F, outdoor bins must be placed in the shade and protected from cold and heat. To insulate an outdoor worm bin in winter, place one or more of the following items inside the bin: dryer lint, old socks, or pieces of blanket, fleece, or carpet. The outside of the bin can be covered by hay bales, blankets, or insulating board, leaving space for oxygen to enter.

Bedding is needed for the worms to live in and for users to bury food scraps. Bedding should be a non-toxic material that holds moisture and allows air to circulate. Shredded paper, such as newspapers, white office paper, and cardboard, is used most often as bedding. Soak shredded paper in water for 10 minutes and wring out before putting it in the worm bin. Earthworms need moist bedding so their bodies do not dry out. Add one handful of soil to provide grit to aid in earthworm digestion. No more than one handful of soil should be added to the bin because red wigglers do not live in the soil (they live in leaf and manure piles).

Fill the worm bin one-third to halfway with moistened bedding. Gently place the worms on top of the bedding and allow them to burrow underneath on their own. Wait a couple of days before feeding the worms. You may need to keep the bin in a 24-hour lighted space for a few days to prevent the worms from trying to leave the bin before they get adjusted to their new environment.

Worms can be fed vegetables, fruit, coffee grounds, eggshells, torn open tea bags, and some types of leftovers. Do not feed them meat, grease, bones, dairy products, cat or dog feces, spicy foods (hot peppers, onions, and garlic), citrus fruits, sugary foods, or fresh grass. Always bury the food under one to two inches of bedding. No food waste should be visible inside the bin.

Worms working away to make vermicompost.

Worms working away to make vermicompost. 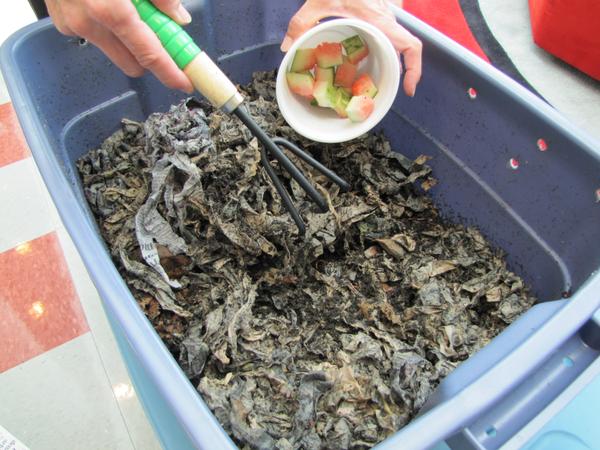 It is important to use good safety practices to protect the health of all involved. After touching earthworms or the inside of the worm bin, children and teachers should wash their hands with soap. Use a three-pronged garden tool to pull back the bedding to bury food and see the earthworms. This safety measure helps keep the organic materials from getting under your fingernails.

Earthworm castings will build up on the bottom of the worm bin. Vermicompost will be ready to harvest after three or four months. Three harvesting methods are described in Worms Can Recycle Your Garbage.2

A little bit of vermicompost goes a long way! Vermicompost can have significant effects on plant growth, health, and resistance to disease and pests. For plants and seedlings, combine one part vermicompost to four parts potting medium so that vermicompost is 20% of the soil mix. As a top dressing, incorporate 1⁄2-inch deep vermicompost around the drip line (where water would drip off the plant and land on the soil).

Skip to Fun With Worms!

Children are fascinated by earthworms and eager to examine them. Form small groups of two to six. Provide each group with a moistened paper towel and place a small handful of earthworms on it. For the next 20 minutes or so, children will entertain themselves observing the worms. Caution them to treat the worms gently and keep them on the paper towels so their skins stay moist (although it’s okay to hold them for a little while). The teacher may periodically mist the worms to keep their bodies moist. The activity may be repeated several times, while asking students questions.

Children also enjoy examining earthworm egg capsules. They are about the size of a grain of rice, lemon-shaped, shiny, and light brown. Inside a red wiggler egg capsule are two to seven baby earthworms, and on average, three will hatch.

In a handful of material from a worm bin, children may also observe tiny decomposer organisms such as sow bugs, springtails, pot worms, black soldier flies, earwigs, and mites. Magnifying lenses will help children examine these creatures. For more activities, see Vermicomposting: A School Enrichment Curriculum. It can be modified for any age.

Adding food waste to a worm bin indoors is a fun activity - don't forget to cover it with bedding!

Adding food waste to a worm bin indoors is a fun activity - don't forget to cover it with bedding!

Funding for this publication as provided in part by the John Rex Endowment.

The author wishes to express appreciation to Alison Duncan, Debra Ireland, Sam Marshall, and Elizabeth Overcash for their assistance in preparing this publication.

This publication in the Local Foods series is the last of eight publications about childcare center production gardens: