Granville wilt is one of the most devastating diseases of tobacco (Nicotiana tabacum) in North Carolina. Granville wilt was first reported in Granville County, North Carolina in 1881, but since then it has spread out to all major tobacco producing counties. Under ideal environmental conditions for disease development, field losses can vary from 25 to 100%. No single control method is effective and current management strategies rely on integrated pest management (IPM), which incorporate soil fumigants, crop rotation and sanitation.

Granville wilt is caused by the soil-borne bacterium Ralstonia solanacearum, which is endemic to the Southeast United States. R. solanacearum is aerobic, non-encapsulated, non-endospore forming. The bacterium survives saprophytically in soil or on an alternate host until a host (tobacco) is present. The bacterium is spread by anything that moves infested soil or water, include splash dispersal, movement of infected plants, or movement of soil on equipment. Bacteria may also gain access to plants through mechanical harvest and at topping. Growth of the bacteria is favored by warm, wet conditions.

Wilting and yellowing of younger leaves are the characteristic symptoms observed in hosts susceptible to R. solanacearum (Figure 1). The wilt is often unilateral, meaning that it is restricted to one side of the plant or one side of the leaf mid-vein. Also, symptom expression is directly affected by water availability and temperature. Generally, warmer temperatures above 80ºF promote faster symptom development than cooler temperatures. As the disease progresses, the leaves turn yellow and scorch-like symptoms may be expressed at the margins, and between the veins, followed by a total collapse of the plant. Stunting and leaf distortion may be observed in plants that do not die. Primary and secondary roots may rot, which can be observed when symptomatic plants are dug from the soil. When performing a cross section along the central axis, a reddish to brown discoloration of the vascular system (Figure 2), a hollow stem due to the pith rotting, and lesions on the stem surface may be observed. Because R. solanacearum can be found in high cell densities on infected tissues, a common sign of the pathogen is a milky white bacterial streaming that accumulate at the 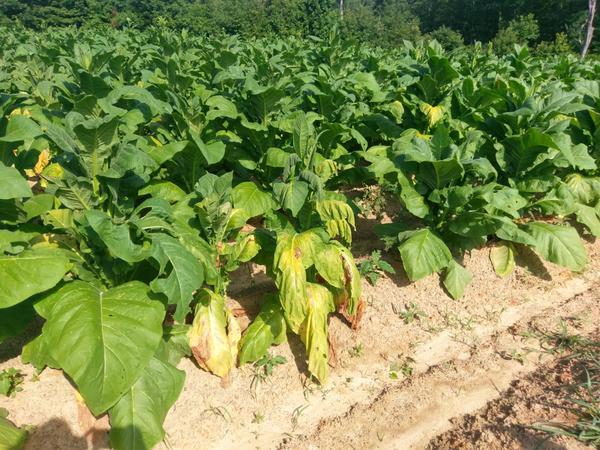 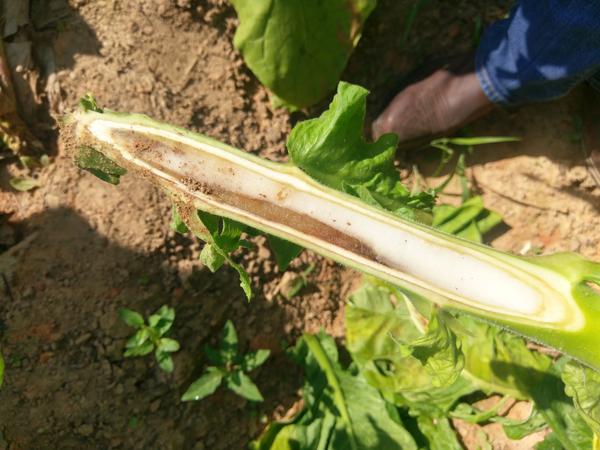 Figure 2. Cross-section of tobacco stem showing bacterial oozing and discoloration of the pith.

Figure 2. Cross-section of tobacco stem showing bacterial oozing and discoloration of the pith.

Root and crown infections are characterized by rapid yellowing, wilting of leaves, and eventually plant death. At the ground level, a dark brown to black lesion often appears on the stalk. When cut open, the lower stem and crown often show blackened pith with distinct disks and white hyphae. 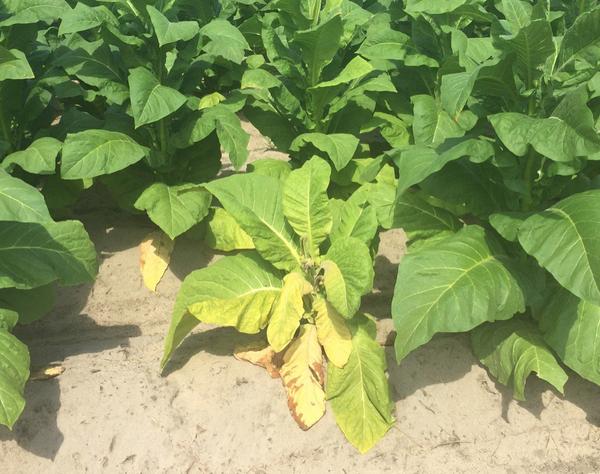 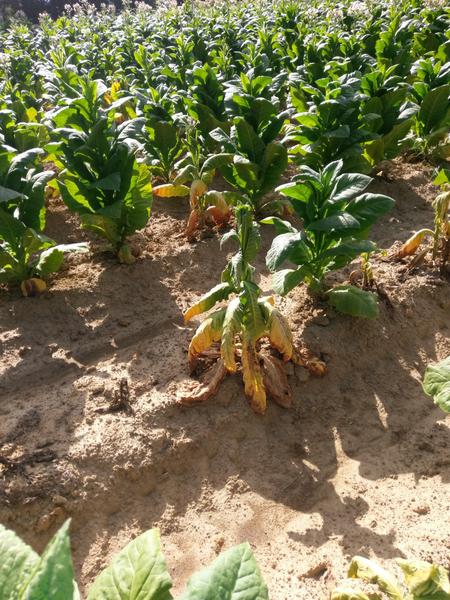 In order to find a potential susceptible host, R. solanacearum requires swimming motility and chemotaxis; the bacterium is attracted to specific amino acids, organic acids, and root exudates. After finding a host, the bacterium attaches to the roots and forms microcolonies. Then, the bacterium enters its host through wounds or natural openings such as the beginning of lateral roots or wounds from nematodes or cultivation. The bacteria colonize the intercellular spaces within the central cylinder of the root, and subsequently invades the water transporting xylem elements in the vascular system, where it becomes non-motile. The non-motile R. solanacearum moves radially from the xylem vessels to the pith, and from the pith to the cortex of roots and up into the stem relying on the plant’s transpirational flow. A systemic infection and the clogging of the host vascular system typically follows. Because the vascular system becomes clogged by the bacteria, plant collapse occurs, and the soil-borne bacterium returns to the bulk soil to repeat its disease cycle.

There are few effective management strategies for Granville wilt of tobacco. Single control methods are usually inefficient at reducing bacterial wilt, especially in areas where the bacteria is endemic or well established in the soil. Current control methods for bacterial wilt rely on integrated pest management (IPM), which combines multiple disease control strategies, including host resistance, crop rotation, and pesticides.

Crop rotation can be a useful tool to reduce inoculum in soil. Soybean, small grains, fescue and lespedeza are some of the suggested crops to be included on the rotation, particularly when weeds are well managed. The number of years of crop rotation will depend on factors like, the level of infestation and the survival capacity of the bacterium in local soils. However, a long-term rotation, with no less than four years with three non-host crops alternating, is best for the control of Granville wilt.

Soil fumigants are the most common type of pesticide used for managing Granville wilt. Fumigants containing chloropicrin are the most effective at reducing R. solanacerum inoculum. These may be efficient controlling Granville wilt when used in combination with other cultural control practices, but losses have been documented with their use.

The efficacy of several commercially available, microbial-based products and organic amendments have recently been evaluated under field conditions in Johnston County. Biological control efficacy depends on several factors including variety used and environmental conditions. For example, disease severity decreased when McGill compost was combined with the cv. ‘NC471’, and, similarly, Serifel (BASF product) decreased the disease intensity when combined with the cv. ‘NC196'. Because biocontrol agents are living organisms, they may be impacted by year-to-year environmental condition changes. If interested in incorporating a biological control treatment, testing it in a small portion of the field where disease pressure is high may help to evaluate regional impacts and efficacy.

This factsheet was prepared by the NCSU Field Crops and Tobacco Pathology Lab in 2019 and updated May 2020.