Interest in cover crop mulches has increased out of both economic and soil conservation concerns. The number of tractor passes required to produce corn and soybeans organically is expensive and logistically challenging. Farmers currently use blind cultivators, such as a rotary hoe or flex-tine harrow, two to five times, followed by two to four between-row cultivations (see chapter 10, Weed Management). Repeated cultivations can be extremely effective but are highly sensitive to weather. During wet springs, cultivations are missed, leading to weedy fields. Soybeans are particularly troublesome when blind cultivations are missed. We cannot throw as much soil towards soybean plants as with corn, meaning in-row weeds missed by blind cultivation remain in the field until harvest time.

Rolling cover crops has proven to be the most effective and inexpensive method for organic farmers to kill cover crops. Multiple designs for roller-crimpers exist (Figure 11-1) to accommodate flat or bedded plantings. Free designs are available at the Rodale Institute’s website. The design advocated by Rodale is manufactured and sold by I&J Manufacturing of Gap, PA. Roller-crimper designs are engineered to maximize force on cover crop stems and to minimize vibrations on the tractor frame. Even so, farmers have reported occasional success using preexisting equipment such as cultipackers and smooth rollers. A combination of the right cover crop growth stage and hot weather can result in a good kill without having the optimal equipment.

Cover crops must be at least flowering or in the early stage of seed set before they can be killed with a roller. Each species has its set of characteristics to look for in determining when it can be roll-killed. Typical times and the growth stage characteristics are listed in Tables 11-1 and 11-2. Same day rolling and planting has been advocated by some institutions. The roller can be mounted on the front of the tractor with the planter in the rear. Although this approach reduces trips, the soils are significantly drier at planting with the same-day approach. Researchers in Alabama, Georgia, and Maryland recommend rolling and waiting for rainfall to replenish soil moisture before planting. In North Carolina, only same-day planting has been tested so far, with good germination in soybean in seven out of nine trials, one of which had to be replanted to prevent total loss. Rolling and planting on different days presents a problem for farmers without GPS guidance. Rolling and planting must occur in the same direction, making the issue of what pattern to use when rolling and how to mark the passes with the planter a significant one.

These tables estimate the time of full bloom, or ideal time for rolling the crop to fully kill the cover crop so that corn or soybeans can be planted into the rolled mulch.

Several features of a no-till planter are essential for such a high residue environment:

To get consistent weed control and good soybean yields, more than 8,000 pounds of rye dry matter is needed (Figure 11-2 - Treatments consisted of rolled rye mulch with no additional weed control measures versus a weed-free check that consisted of conventional tillage with S-metoloachlor PRE and imazethpyr POST). Early planting and adequate fertility are required to obtain this level of production. Even then, overly wet winters inhibit rye growth. Walking fields in March is recommended to assess whether the stand is sufficient for good rye production. Poor or spotty stands should be disked in and a clean tillage system used. If rye becomes too large before disking, it can be difficult to prepare a clean seed bed and to cultivate. 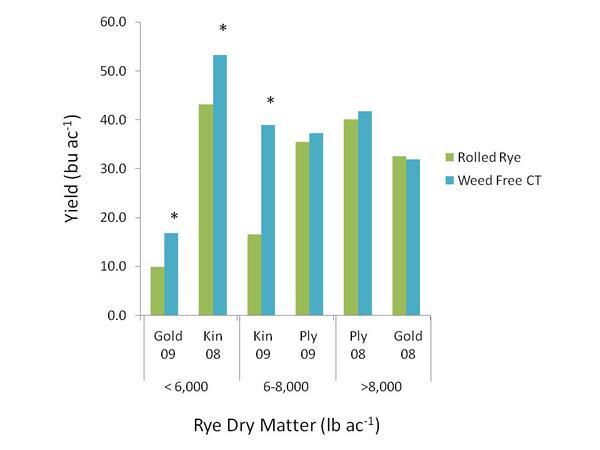 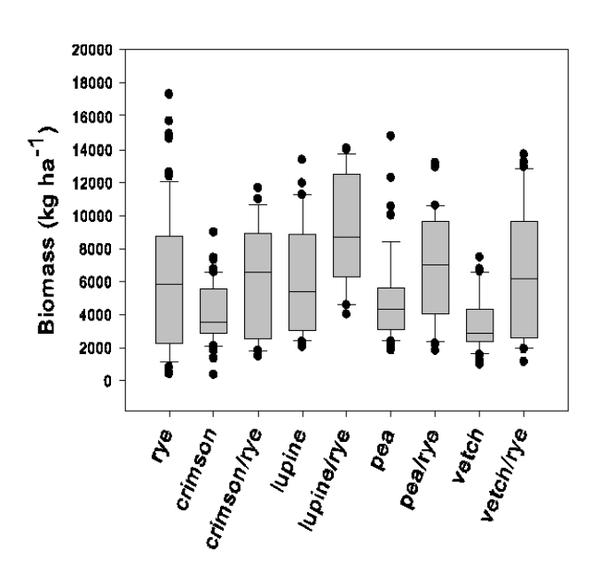 Figure 11-3. Productivity of legumes and legume-and-cereal mixes in the Southeast from 2008 to 2010. Figures come from a pooled analysis of trials in Georgia (GA) and North Carolina (NC).

Figure 11-3. Productivity of legumes and legume-and-cereal mixes in the Southeast from 2008 to 2010. Figures come from a pooled analysis of trials in Georgia (GA) and North Carolina (NC).

N Fertility in the Legume–Corn System

Skip to N Fertility in the Legume–Corn System

Legumes can be grown in monoculture or as a mixture with a small grain. Legumes can provide a substantial proportion of the N demand for corn. While N production varies significantly from year to year, a good rule of thumb is that the legume can provide two-thirds of the needed nitrogen. Pelleted organic fertilizer can be applied at planting in only limited amounts with normal granular fertilizer boxes. For instance, John Deere granular boxes, with the high rate auger installed, can deliver approximately 700 pounds of conventional fertilizer at the highest setting. Pelleted feather meal, as an example, is less dense and only 500 pounds can be delivered. At 12 to 13 percent N, the total N that can be applied is 65 pounds. Assuming adequate legume cover crop growth, this may be sufficient. Other organic fertilizers such as pelleted chicken litter are less rich in N, and therefore even less N can be applied. Clampco sells organic fertilizer boxes capable of putting down higher rates of granular and pelleted material than conventional fertilizer boxes. Another option is to broadcast chicken litter over the top at or soon after planting. While this practice would be allowed for feed crops, manures must be soil incorporated at least 90 days before harvest for all food grade grains.