Soybean seedling diseases are caused by a variety of soilborne fungi and oomycetes. Pythium seedling blight is caused by many Pythium species that can affect weeds and several rotational crops. Phytophthora root rot is caused primarily by Phytophthora sojae; however, a second less common species, P. sansomeana, has a broader host range and can cause damage to soybean. Rhizoctonia seedling blight is caused by Rhizoctonia solani, and Fusarium root rot is caused by at least 12 Fusarium species including F. oxysporum. These four diseases are the most common soybean seedling diseases in the United States which can cause losses to growers through poor stand establishment, requiring replanting and causing a decrease in yield potential. 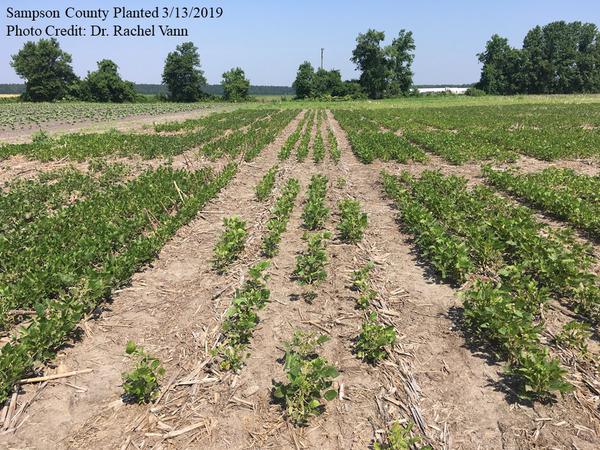 Damages from Pythium spp. can be observed at multiple stages of plant development, including causing seed rot, damping off, and root rot. Seed rot and damping off will result in poor stand establishment. Infected plants after emergence display poor root development and a light brown, water-soaked rot that makes them easy to remove from soil. Hypocotyls or cotyledons may also show symptoms including yellow to tan, water-soaked lesions.

Early symptoms include poor stand, and dying seedlings may have missing or soft, brown rotted roots. Symptoms found later in the season include stunting, stem and root rot, and development of brown stem canker that can cause girdling. When the stem is transversely cut, vascular tissue and cortex have brown discoloration. Leaves will later become chlorotic and wilted if infection is severe.

Rhizoctonia solani can cause pre- and post- emergence damping off as well as root rots as the season progresses. Infected plants can be found singly or in circular to oblong patches in the field that move in the direction of tillage. Early infections can cause seed decay leading to stand reduction. Depending on the severity, stand reduction may go largely unnoticed, but large reductions that require replanting can be an indicator that something abnormal is happening in the field. In infected plants that survive through germination a dry, reddish-brown sunken lesion may appear on the hypocotyl. Sunken lesions can cause girdling of the stem leading to plant death. This is typically visible before the first trifoliate leaf forms. In mature plants, Rhizoctonia solani causes root rot associated with wilting or stunting of above ground foliage.

Several Fusarium spp. can cause pre- and post- emergence damping-off in soybean. Emergence in infected fields may be slow. Early seedling symptoms include chlorotic cotyledons and a dry root rot. Dark brown discoloration is mostly found in the roots; however, dark brown to reddish-brown lesions may be found on the hypocotyls and cotyledons. Vascular tissue in the roots and stem may also have some brown discoloration. Mature plants may also be affected by Fusarium spp.; however, damage to the roots from nematodes or envionmental stresses is often required for disease. Symptoms in mature plants include stunting, foliar chlorosis and necrosis that begins at leaf edges. 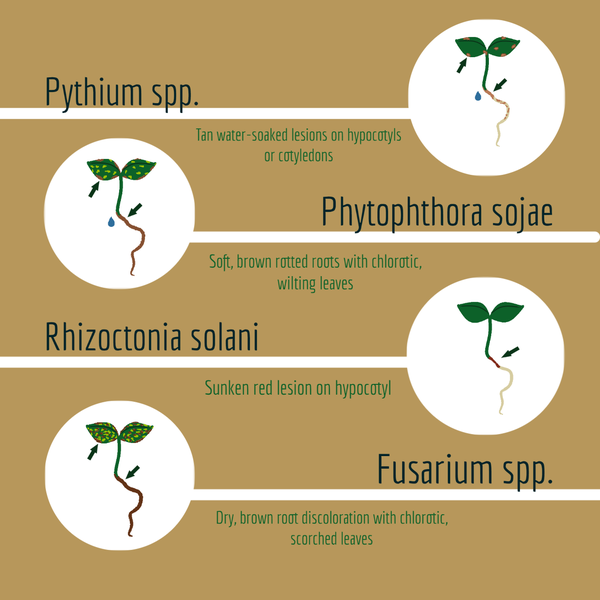 Pythium spp. oospores are their primary survival structure which can survive for long periods of time in the soil. Infection of soybean can occur soon after planting when hyphae or zoospores produced by sporangia reach the seed or root. Reproduction in infected tissue may happen rapidly but secondary infections are limited.

Phytophthora sojae can survive as oospores in soil or crop residue without a host for several years. Spore germination occurs when soil is saturated and soil temps exceed 60°F, and hyphae from oospores can directly infect plants or form sporangia . The sporangia produce zoospores that are mobile in water for short distances, and can be further moved in water movement through soil. Zoospores are attracted to seed and root exudates, causing the spores to germinate and penetrate plant roots.

Rhizoctonia solani causes a monocyclic disease, and has a broad host range that survives in soil as sclerotia and in plant residue as mycelium. Favorable growth conditions for this pathogen vary depending on the anastomosis group. Infection can occur soon after planting but symptoms can be observed at many growth stages. Severity is increased in plants where pest injury or herbicide damage is present.

Fusarium spp. have a wide host range, surviving in plant debris as mycelium and as chlamydospores (strong, resting spores). Fusarium inoculum is not mobile like Pythium or Phytophthora spp. (described above), and infections can be initiated when seeds or roots come into contact with spores or mycelium. Plants are susceptible to infection throughout the growing season, but injuries are often required for infections to occur. Nematode damages predisposes roots to infection, particularly soybean cyst nematode (Heterodera glycines), which migrate within the roots causing intracellular damage, or southern root knot nematode (Meloidogyne incognita).

To mitigate disease risk, plant under conditions that will favor quick stand establishment. Improve soil drainage when possible. Planting on beds may help keep seed from becoming too saturated when other options are not available. Monitor planting depth to ensure seed emergence won’t be delayed. While crop rotation is effective for many soybean pathogens, the effectiveness of crop rotation will depend on the specific pathogen associated with seedling disease. Seedling disease pathogens have a very broad host range which limits suitable non-host crops for rotation.

It is important to scout fields early when infected plants are alive but displaying symptoms for accurate diagnosis of pathogen pressures. The disease history in a given field is important to understand when choosing fungicide seed treatments. Not all seed treatments are effective for every seedling diseases. For example, Pythium spp. and Fusarium spp. require different modes of action for disease prevention.

Seed treatment fungicide efficacy has been summarized into a table to help choose the right fungicide for each pathogen. This is an excellent tool to use to select active ingredients that will help protect soybeans. It is also important to rotate active ingredients used each year regardless of crop planted to help reduce fungicide resistance development.

This factsheet was prepared by the NCSU Field Crops and Tobacco Pathology Lab in 2020.