Adult – This moth has a wingspan of 30 to 38 mm. The forewings are ash gray, light yellowish-brown, or dark reddish-brown. The hind wings are cinnamon brown with a row of light spots near the margin. When the wings are fully extended, a dark diagonal line extending across both sets of wings is evident.

Egg – The white, prominently ribbed egg is flattened on the lower surface and turns pink before hatching. Its diameter is about 2 mm.

Larva – The sparsely haired larva, 2.5 to 48.0 mm long, varies in color from green to brown or black. It has a light, dorsal stripe bordered by broad, dark stripes, and a broad, white, longitudinal stripe on each side. The larva has five pairs of prolegs and thrashes vigorously when disturbed.

Pupa – The pupa, 18 to 20 mm long, is light green or brown and has three pairs of hooked spines at the end of the abdomen. 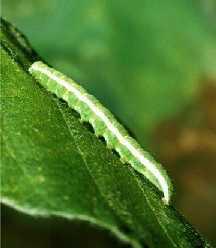 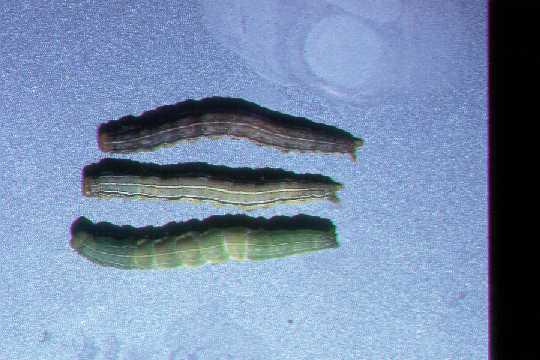 The velvetbean caterpillar is a southern species that does not overwinter in North Carolina. In most years velvetbean caterpillar moths migrate into our state in mid-summer and colonize soybean fields. They may reproduce and re-infest late soybeans and added immigration can also occur. Populations usually do not reach damaging levels, however, about one or two years out of 10 many acres of late planted soybeans will become seriously infested. As with soybean looper, this insect occurs with much greater frequency in coastal counties from Cape Lookout and south. High numbers of velvetbean caterpillar seldom infest soybeans inland any further than about Lenoir county, but can be blown as far inland as Union county after hurricanes.

Velvetbean caterpillar moths become most numerous in August and September. The moths have a wingspan of approximately 11⁄2 inches and vary in color from light tan, or cinnamon, to chocolate but always have a black line running from wing-tip to wing-tip; the wings are held out from the body. Caterpillars are green when small but may range from light green, yellow, or black when larger. There are narrow and wider longitudinal light colored lines running the length of the body, the head is yellow or orange, and there are five pair of fleshy prolegs. Velvetbean caterpillars are very active, often wiggling violently when placed in the hand. Larger caterpillars have a voracious appetite and fields are sometimes stripped of foliage. If present at high numbers, pod clipping may occur after most foliage is consumed.

Since this is a sporadic pest there are no cultural practices directed to velvetbean caterpillar management, however, early maturing fields seldom get economic infestations. Scouting, the application of thresholds, and treatment with insecticide on an as-needed basis are the primary management tactics. This insect is very easily killed with almost any class of insecticide and low rates can be successfully used. 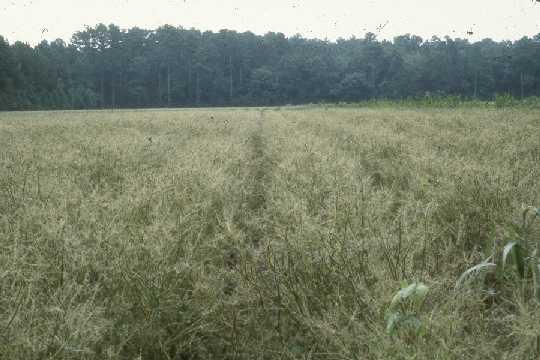