Soybeans are legumes and, like most other legumes, have the ability to supply their own nitrogen. Nitrogen fixation begins with the formation of a nodule on the root. Nodules are produced from Bradyrhizobia bacteria in the soil that invade the root and multiply within the root cells. The soybean plant supplies the bacteria with nutrients and energy, and in return the bacteria convert atmospheric nitrogen (N2) in the air to nitrates (NH3) the plant can then use.

Understanding how soybeans grow and develop is critical to effectively managing the crop for increasing yields.

A descriptive system has been developed to describe the growth stage of a soybean plant. The system most commonly used was developed by Fehr and Caviness (1977). Understanding and being familiar with soybean growth stages is essential for proper management throughout the year. Soybean development can be divided into vegetative (V) and reproductive (R) stages (Table 1-1). Each stage starts when at least 50% of plants in that field are at that stage.

The vegetative stages begin with emergence (VE) which occurs when elongation of the hypocotyl brings the cotyledons out of the soil. After emergence, a pair of unifoliate leaves on the first node unroll just above the cotyledons and start the VC stage. Following VC, trifoliate leaves begin to unfold. The number of nodes with the trifoliate leaf fully developed and unrolled is referred to as V(n). A leaf is considered fully developed when the leaf at the node directly above it has expanded enough that the edges of the leaflets are not touching. The vegetative stages proceed from V1 through V(n).

The number of days between stages varies depending on the maturity group and variety planted, but there are a few trends that usually hold true.

Soybean development is also influenced by temperature, day length, soil moisture, and other environmental conditions. Therefore, the timing of growth stages will be different for different varieties, planting dates, and climates. 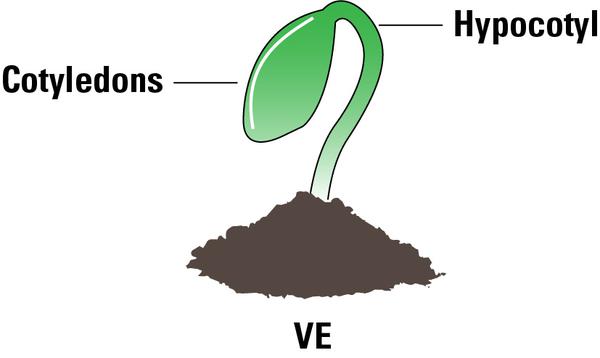 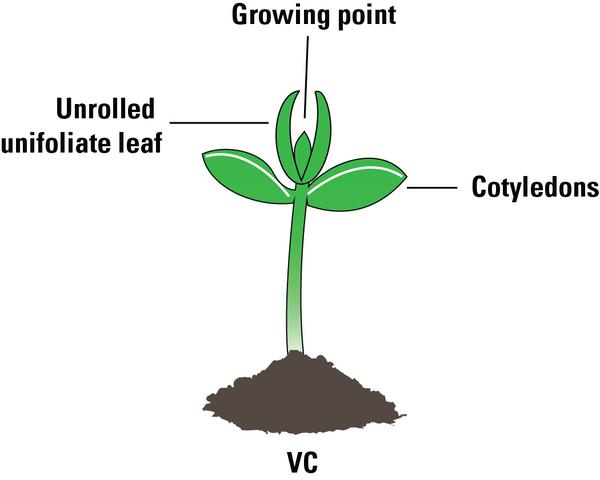 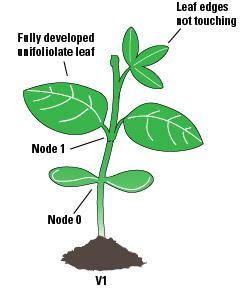 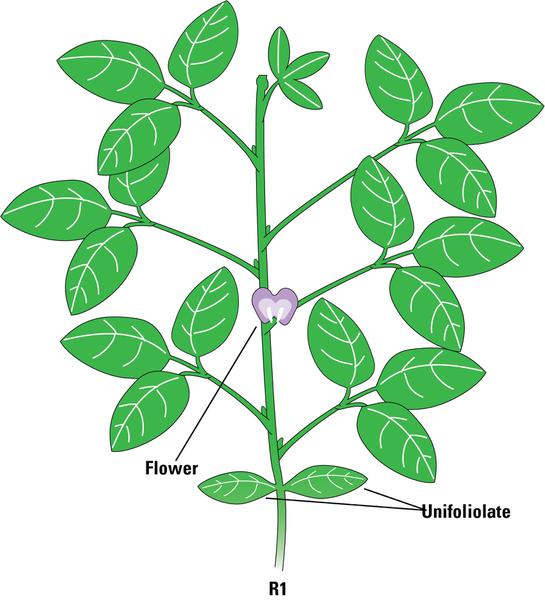 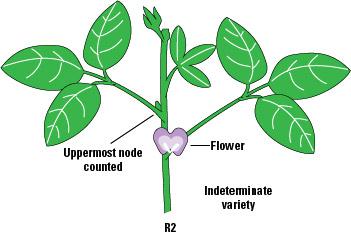 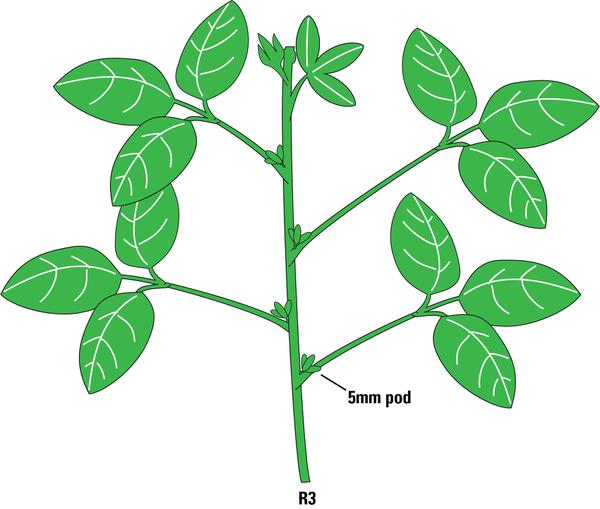 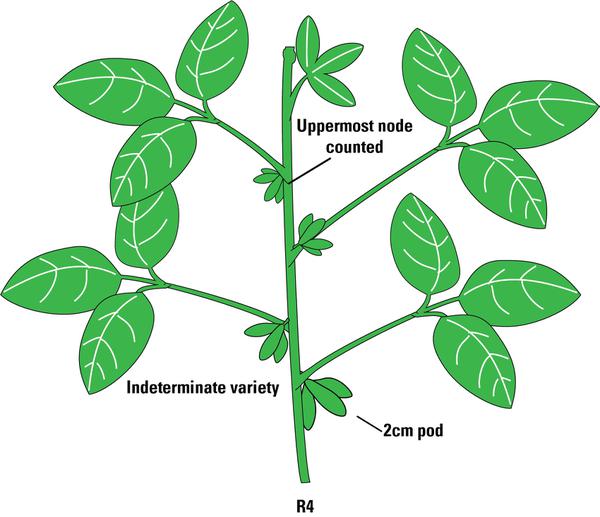 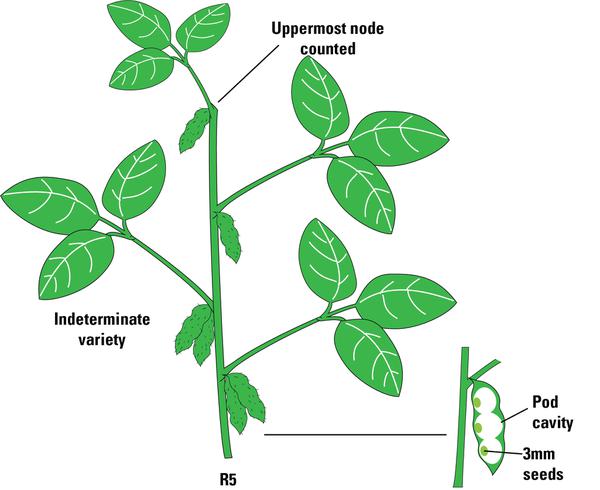 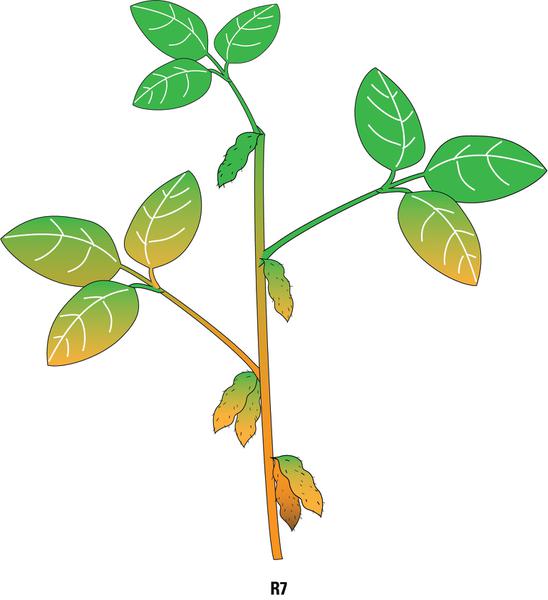 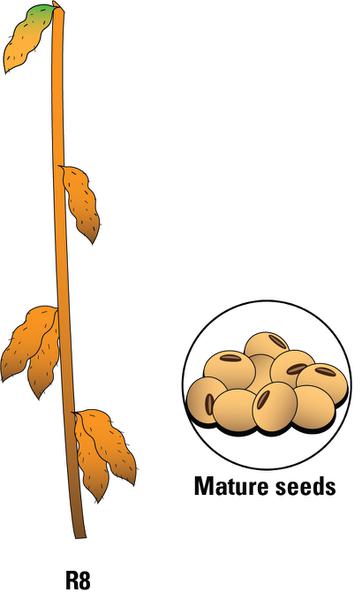 Soybeans were first classified into maturity groups (MGs) in the early 1900s. Today there are 13 major groups ranging from MG 000 to MG X, with lower numbered maturity groups representing earlier maturing varieties. These groupings were based on adaptation within certain latitudes. Maturity group belts run east to west in North America and are on average 125 miles from the north to south. Historically, lower number MGs were grown in the extreme northern United States and Canada, and they progressively got higher as you move south to the Gulf Coast states.

Because of soybean’s ability to adapt to a wide range of conditions and North Carolina’s flexibility in planting date, varieties with maturity group designations outside of the optimal range can still be grown. North Carolina growers successfully plant a range of maturity groups from late IIIs to early VIIs.

Typically, varieties in earlier maturing groups develop fewer leaves and reach R1 earlier. This means a group V will mature and quit growing earlier than a group VI will, if planted at the same time. Interestingly, group IV and earlier maturing varieties are almost all indeterminate in growth habit, while group V and later maturing varieties are almost all determinate varieties. Why seems to be a mystery, but in the northern hemisphere, it’s true all the way around the globe. Whether one growth habit is an advantage or a disadvantage, compared to the other, is arguable.