Skip to Nematode Life Cycle and Favorable Conditions for Disease

Root knot nematodes are a multi-cyclic pathogen that survive in the soil. Eggs are produced en masse by endoparasitic (living inside of root tissues) females throughout the growing season, and eggs do not require the presence root exudates (chemicals produced by plants) to hatch. After emerging from eggs, juvenile nematodes move through water films to find a new host plant. Juveniles are attracted to root exudates produced by plants, and enter through root growing tips. Once inside the plant, nematodes secrete chemicals that cause the host plant roots to create giant cells that form the root gall where the nematode resides. While in the root tissue the nematode changes from a worm-shape to a ballon-shaped female. These females are sedentary and feed on the giant cells produced by the plant.

This life cycle may occur multiple times during the growing season and happens more rapidly when conditions are conducive. Nematodes are most active and reproductive at temperatures above 64°F. Because they move in water films between soil particles, sandy soils with greater space between soil particles favor their movement.

Symptoms within a field are often found in patches where nematodes are at higher densities. Aboveground symptoms are not always present when nematodes are damaging plants at a low level. At moderate to high populations, plants may appear stunted, yellowed, and wilted (Figure 1). Foliar symptoms are more severe under drought conditions because nematodes are directly impacting the plants ability to uptake water and nutrients as well as increasing secondary pathogens (i.e. Fusarium wilt).

When removed from the soil, roots have distinct swellings (galls, Figure 2) where female nematodes and egg masses can be found. Roots may also have signs/symptoms associated with root rotting pathogens like Fusarium wilt, Black Shank, or Granville Wilt. 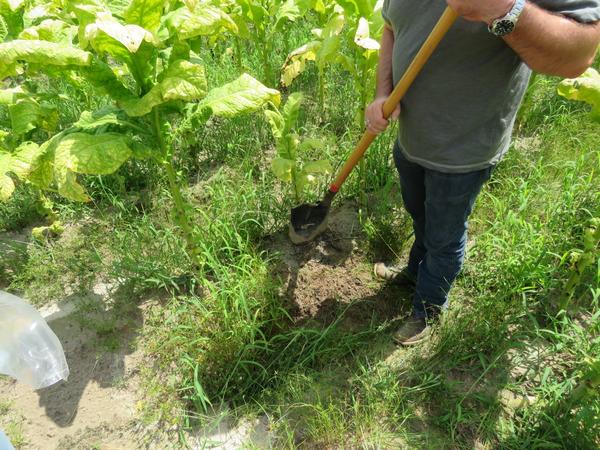 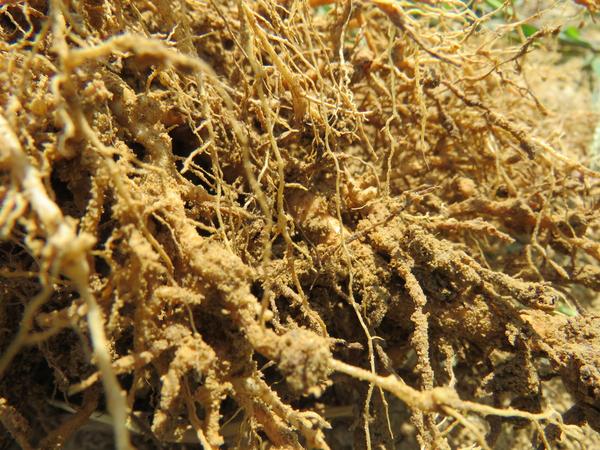 If diagnosis cannot be accomplished through visible symptoms, soil samples can be taken and sent to a diagnostic lab like the North Carolina Department of Agriculture, Agronomic Services, Nematode Advisory and Diagnostic Lab or other private labs found in the region.

Nematode samples should be taken from 4-5 acre plots when attempting to diagnose large fields as nematode populations are not evenly distributed. Using a soil probe collect 20 to 30 soil cores at a depth of 6 to 8 inches from each area in a zigzag pattern. Soil and plants may also be sent to the Plant Disease & Insect clinic to be examined.When sending samples include an accurate crop history, information about fertility, herbicides, and cultural practices to aid in diagnosis.

Traditional soil assays cannot differentiate between nematode species due to the similarities of physical morphology. Nematode species identification can be obtained through a molecular assay at a diagnostic lab, but must be requested when a sample is submitted. When requesting a molecular assay, include roots that have distinct root galls when submitting a sample.

Nematode management begins with site selection and sampling. Sampling is best conducted in the fall prior to Thanksgiving when nematode number are at their highest. It is valuable to know what damage to manage for when selecting a plan for a given field.

Exclusion and Sanitation: Nematodes can be moved in soil on equipment, vehicles, or shoes that have entered the field. Equipment from nematode infested fields should be sanitized before moving to unaffected fields. Workers should also santize shoes between working nematode-affected fields.

* Many products are available for a given active ingredient, and efficacy may vary by formulation.

This factsheet was prepared by the NCSU Field Crops and Tobacco Pathology Lab in 2017.