The American black bear is the smallest of the three species of bear that occur in the United States, but the largest animal species occurring in North Carolina. This medium-sized bear is usually black with a brown muzzle, lacks a shoulder hump (that is found on the grizzly bear), and may have a white patch or “chest blaze” on the chest. Although black is the predominant color, coat appearance in black bears can also be chocolate or cinnamon brown. Black bears exhibit sexual dimorphism with males being larger than females; adult female black bears generally weigh between 90 and 175 pounds, whereas males weigh between 130 and 660 pounds. The largest documented black bear was a male bear that was harvested from the coastal plain of North Carolina and weighed 880 pounds. Black bears vary considerably in size, depending on the quality of the food available. The species’ life expectancy in the wild is between 10 and 25 years. Black bears have a keen sense of smell and hearing; their vision is less acute, but similar to that of humans and they do see in color. Their night vision is good and they detect movement easily. A bear can smell seven times better than a bloodhound, known for tracking lost people. Its big nose has an area inside (called the nasal mucosa) that is 100 times larger than humans. 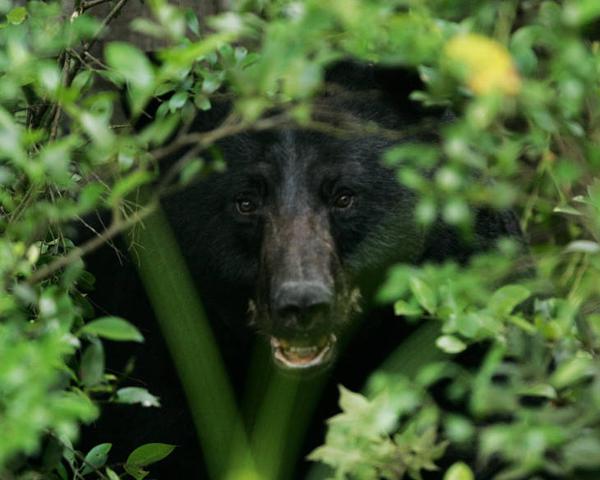 Black bears are found in 40 of the 50 U.S. states, and the only species of bear found in North Carolina and the eastern United States. They are present in the southern Appalachian Mountains and the coastal bays and swamps of North Carolina. Black bears are normally found in forested landscapes, but within such areas they are highly adaptable. They live in arid and moist forests, from sea level to over 2,000 meters (6,560 feet). The highest quality habitat for black bears contains a variety of forest stand ages, including mature forests dominated by hard mast-producing hardwoods and young forest with abundant soft mast and dense cover. Bears typically require extensive, rugged country with dense understory, swamps, bays, or rock outcrops, and room to travel widely. Bears occasionally will cause damage in livestock operations, apple orchards, cornfields, or by feeding on the inner bark of some desired tree species. 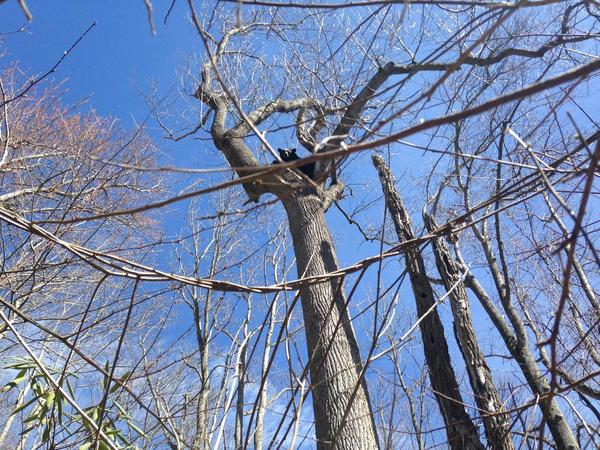 Black bear high in a tree.

Black bear high in a tree. 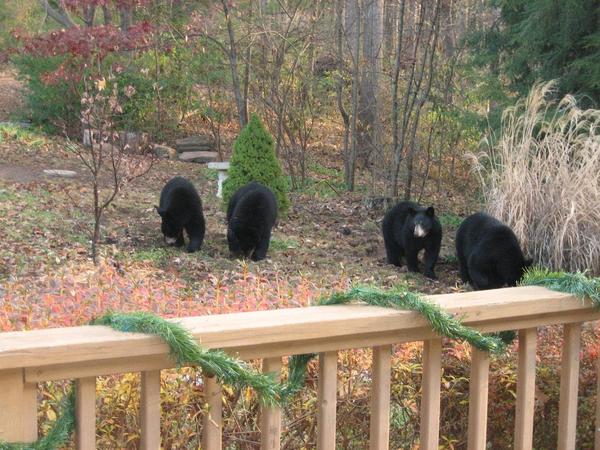 Although technically considered carnivores, black bears are omnivorous, meaning they will eat what is available. The bulk of their diet is hard and soft mast, insects and insect larvae, animals (including fish, retiles, and small mammals), honey, and succulent plants. Black bears can also be efficient predators of deer fawns and elk calves. The amount and types of food eaten by bears varies according to seasonal activities and food availability. Black bears will also readily take advantage of food sources found in urban environments. 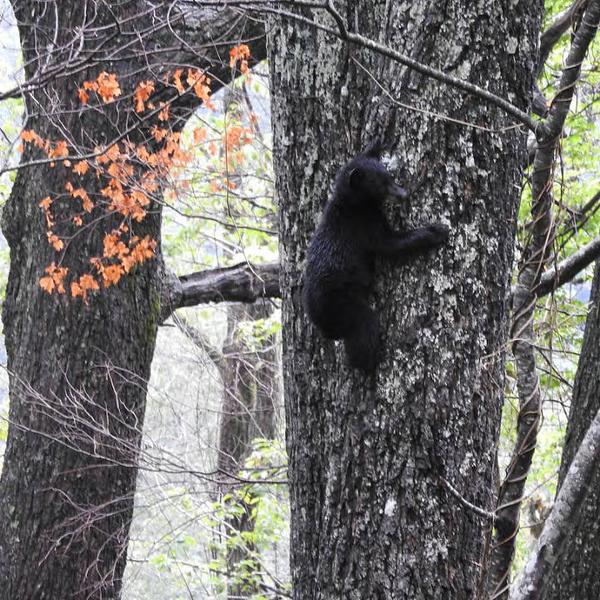 Near areas of human activity, black bears often bed down in dense understory vegetation (e.g., mountain laurel, rhododendron, etc.) in daytime and do much of their moving at sunrise and sunset or during the nighttime. Bears sometimes use trees for resting places. Bears go into winter dormancy anywhere from early October through early April in the southern Appalachians. Bears den in large tree cavities or underneath downed or hollow logs, rocky outcroppings, and dense thicket/understory.

The most important element of escape cover is protection from people, dogs, and vehicles.

Bears require regular access to water sources. Two or more sources of permanent open water per square mile of range should be available.

Typical black bear densities range from one bear per square mile to one bear per seven square miles. The home range of bears in the Southeast ranges from 6 to 19 square miles for females to 18 to 160 square miles for males. Home ranges must include den sites, food, water and cover for adults and young. Home ranges and bear densities may vary considerably depending on available food sources. Mast shortages may result in considerable wanderings and/or expansion of home range size, so other important fall and winter foods should be maintained at high levels to deter movement into areas where bears are more vulnerable or may become involved in negative human-bear interactions. 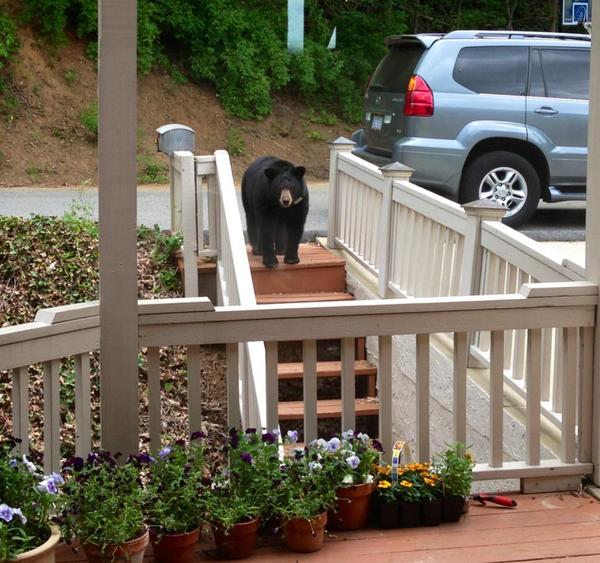 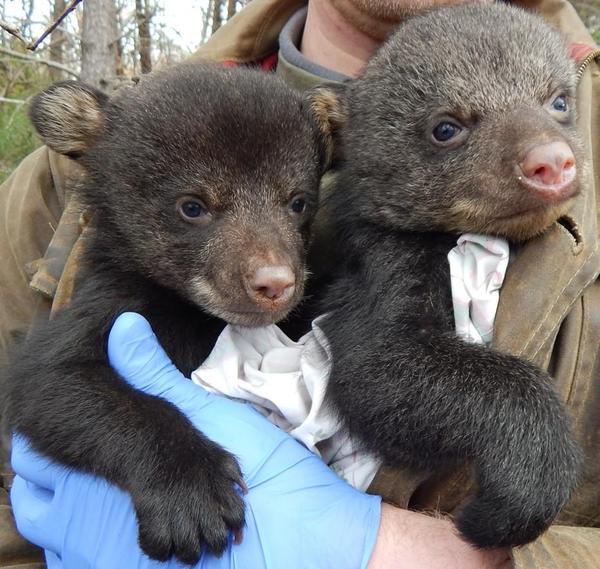 Skip to Living With Bears 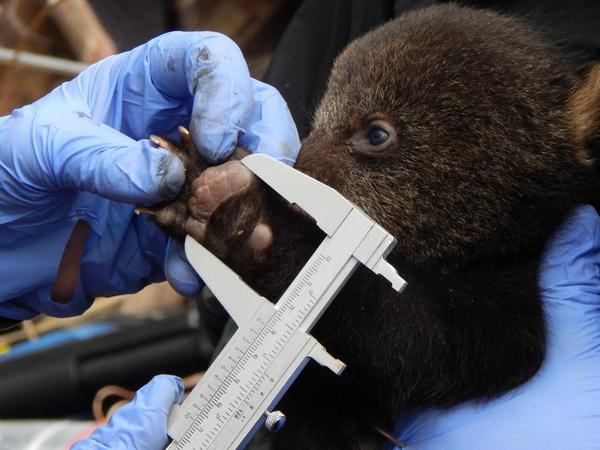 Skip to Species That Benefit From Black Bear Management