The eastern wild turkey is a large game bird present throughout most of North Carolina. Due to habitat loss and over hunting during the early 1900s, turkey populations declined dramatically. With awareness of issues affecting turkey populations and effective population restoration and habitat management, wild turkeys are again abundant. 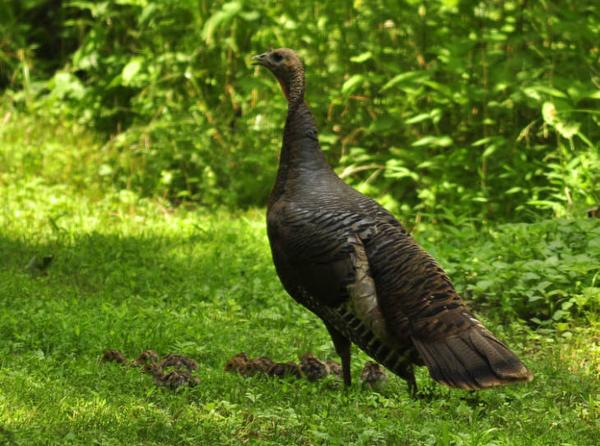 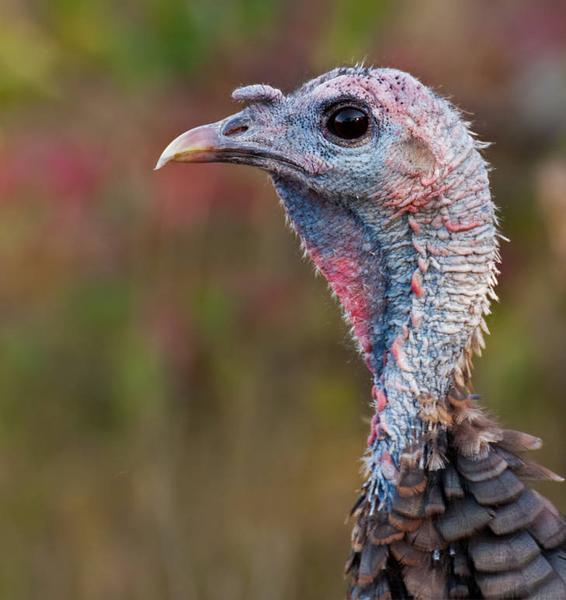 Close-up of a wild turkey's head and neck.

Close-up of a wild turkey's head and neck.

In the Southeast, wild turkeys require extensive forest lands that include nesting cover, brooding cover, roosting sites, and year-round foods. High quality turkey habitat contains a variety of vegetation types, including mature stands of mixed hardwoods with relatively open understory; turkeys need to be able to use their eyesight to escape from predators like coyotes and bobcats. Early successional openings also are important components of habitat because they provide nesting and brooding locations and often are rich in invertebrate foods. Turkeys roost in the canopy of mature, live trees, often over water. Extensive human disturbance, including vehicles, free-running dogs, and urban development, can adversely affect wild turkey populations, causing them to vacate the area. 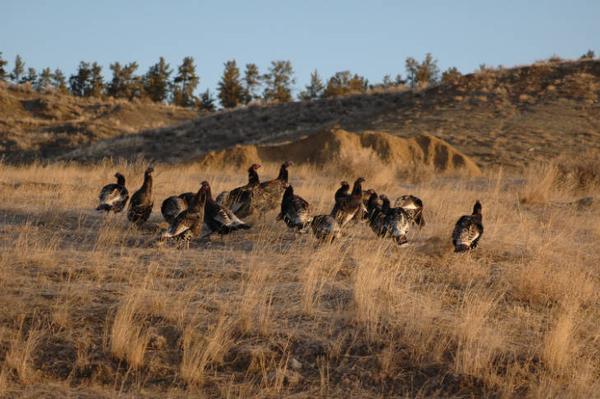 Turkeys eat almost anything they can swallow. About 90% of a wild turkey's diet is plant matter, including seeds and fruits, and the remaining 10% is animal matter (Table 1).

Early successional plant communities dominated by grasses and forbs provide seeds, fruits, and forage, and harbor insects. These areas also provide critically important brooding areas with ideal structure to hide young turkeys, called poults, and still allow the hen to monitor for predators. These plant communities harbor abundant invertebrate foods (e.g., spiders, grasshoppers, beetles) that contribute the protein needed by poults for rapid bone and tissue growth. Nearby forested areas supply roost sites, hard and soft mast, insects, and other animal matter during the remainder of the year. Hard mast, notably acorns, are a primary food source during the fall and winter. Soft mast, including from dogwood, blackgum, blueberry, and holly, are eaten during the summer, fall, and winter, when available. Turkeys eat insects, spiders, and other invertebrates year round.

Brooding and nesting cover often are the limiting habitat factors for turkeys on many properties, so managing for vegetation that accommodates these activities can lead to more abundant turkeys on a property. Nesting cover is characterized by patchy to contiguous understory cover, with a mixture of grasses, forbs, and shrubs. Turkeys typically locate nests adjacent to a downed log or shrub, which provides concealment from one direction but leaves an escape route should the hen be flushed from incubation. Hens use open woodlands with understory for nesting, particularly in extensive bottomland hardwoods. Brood cover is characterized by early succession vegetation dominated by forbs that are no more than 18 to 24” tall, allowing the hen to see over the vegetation. Turkeys nest in the spring, laying eggs in a shallow, leafy, depression on the ground. It’s best to provide nesting and brooding cover within close proximity.

At night, small flocks of wild turkeys roost in trees. Young turkeys are able to fly to roost once they reach 2 to 4 weeks of age but they must roost on the ground until that point. They are at high risk of predation during this period. In the Mountains, conifers sheltered by terrain provide winter roosting cover. In the coastal plain, mature pine, large hardwoods, gum, and cypress all provide roosting sites. 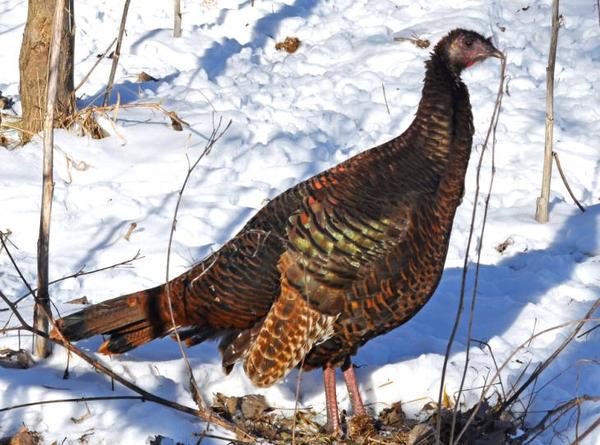 Female wild turkey in the snow.

Female wild turkey in the snow.

Two or more sources of permanent open water per square mile of range are necessary, and are usually available throughout the Southeast. Note: Turkeys often roost over open water or running water for the added security and tall roost trees.

The home range of many wild turkeys may be 1,000 acres or more and is generally irregular in shape. Turkeys shift habitat use seasonally throughout the year in response to changing availability of foods (e.g., fall shift to areas with abundant acorns) and the changing cover requirements (e.g., move from nesting to brooding cover). 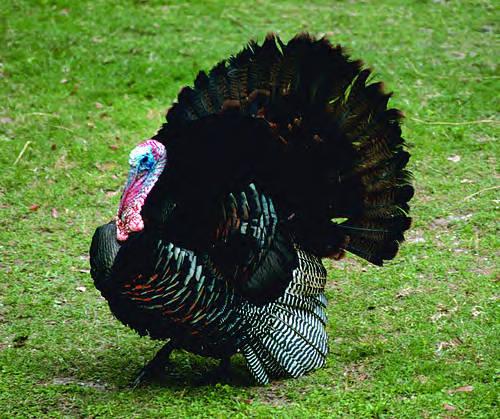