The ruffed grouse is one of 12 species of grouse native to North America, with a range that extends from Alaska and the Rocky Mountains, east to New England and eastern Canada, and south into the mountains of north Georgia. Males of this game bird generally are slightly larger than females, and ruffed grouse spend their entire lives in wooded areas. In North Carolina, ruffed grouse occur only in the mountains, usually above 2,000 feet. Though ruffed grouse exhibit boom and bust population cycles throughout the northern portions of the species’ range, these cycles do not occur in North Carolina, where population densities are consistently low 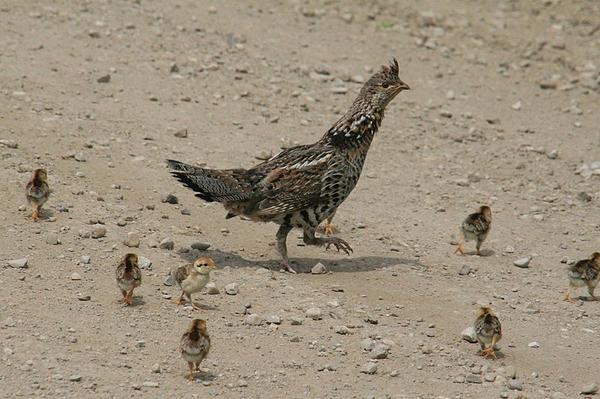 In western North Carolina, ruffed grouse typically inhabit young forests (5 to 20 years old) and the dense mountain laurel and rhododendron in the understory of some mature forests. During most of the year, grouse use the middle stages of forest succession, with extremely high densities of woody stems (i.e., many thousands of stems per acre). In the early spring, male grouse can be heard drumming (male beats his wings, making a drumming sound, for a mating call) in these dense forest stands, especially near ridgetops. Drumming grouse perch on large-diameter downed logs or rocks. Hens select nest sites in a variety of forest types and stand ages, though nests commonly are located in older and less densely stocked forest types than used other times of year. Grouse broods, similar to the broods of other game birds, seek out early successional openings dominated by herbaceous cover. These openings harbor invertebrate prey, an important source of protein for developing chicks. Hens with broods also seek out mesic forest types, often in coves or on the north and east aspects, because of the lush herbaceous layer and patchy shrubs present in these locations. 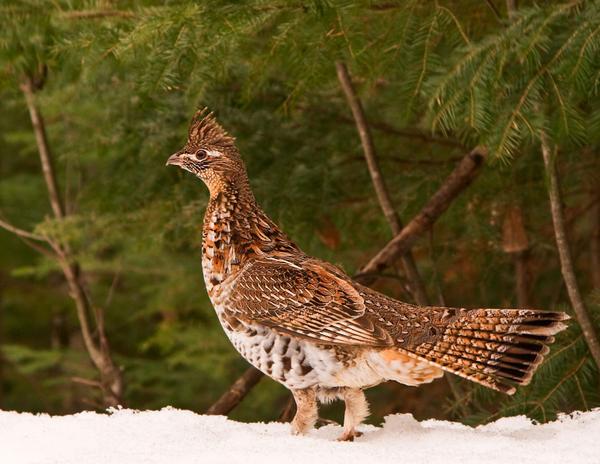 Most adult male grouse have a home range of 10 to 50 acres. Females with broods, however, will range over 40 to 100 acres. Home range is determined by the quality of food, water, and cover. Habitat availability and quality, not hunting, limits grouse densities. 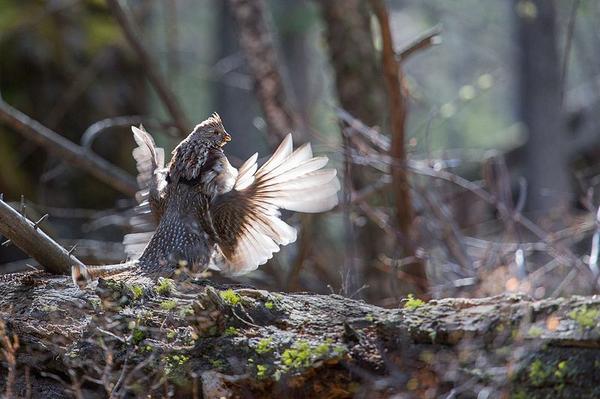 Grouse fulfill their water needs from dew and succulent plants. Standing water is not necessary.

Grouse are opportunistic feeders, but are primarily plant eaters. Although mostly browsers of woody plants, twigs, flowers, and buds, they also like to feed on fleshy fruits and hard mast such as acorns (Table 1). Insects are essential food for broods from late May through July, and grouse have been known to eat small reptiles and amphibians as well. Ruffed grouse feed on over 300 plant species. In the southern portions of the range, ruffed grouse populations may be limited by the availability of winter foods, especially acorns. 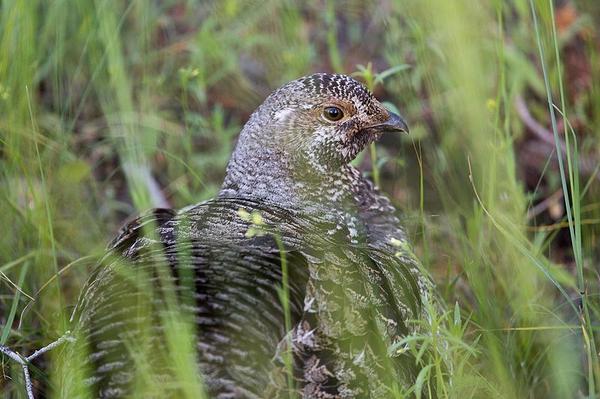 Ruffed grouse in the grass.

Ruffed grouse in the grass.

The major cover requirements are for escape, nesting, brooding, and winter protection. Interspersion of cover types is very important. Escape cover is provided by young forest with high stem density and dense shrubs in the understory of mature forest - the denser, the better.

Nesting cover typically is not a limiting factor in western North Carolina, though hens often locate nests near brood cover. About three-fourths of grouse nests are located within 100 feet of an opening, including gated logging roads; nests also may be near drumming sites. Hens often place nests under or against logs or tree trunks.

Numerous game and nongame species with similar habitat requirements benefit from ruffed grouse management. Rather than focusing solely on grouse, management plans should emphasize the communities of which ruffed grouse are a part. Ruffed grouse associates include: